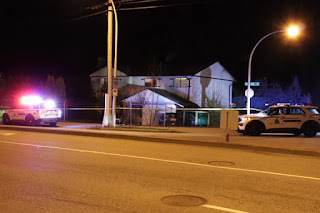 Update: CTV is reporting that "A man shot at a South Surrey home in the early hours of Wednesday morning has died, homicide investigators confirmed Saturday. In a statement, the Integrated Homicide Investigation Team identified the victim of the shooting as 33-year-old David Goldstein, of White Rock. Goldstein suffered critical injuries during the shooting at the home near the intersection of 24 Avenue and 152A Street around 1:30 a.m. Wednesday, according to IHIT."

The Peacearch News is reporitng that "The Integrated Homicide Investigation team has been dispatched to South Surrey, following a shooting this morning (April 6) at a home near Peninsula Village. According to Surrey RCMP, police responded to a report of shots fired at a residence in the 15200-block of 24 Avenue just before 1:30 a.m."

"On arrival, they located an injured 33-year-old man. The victim was transported to hospital and due to the serious nature of his injuries is not expected to survive." A man who lives inside the home told CTV News he’s one of four tenants who rents a bedroom there.