Juan Orlando Hernandez, Former President of Honduras Extradited to the US on Drug Trafficking Charges 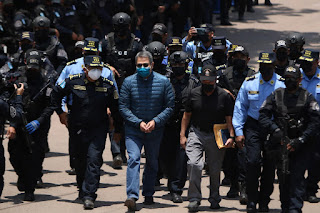 The Borderland Beat is reporitng that "The extradition to the United States of former Honduran President Juan Orlando Hernández was completed this Thursday with his transfer, handcuffed, to the Hernán Acosta Mejía Air Base, in the south of Tegucigalpa, from where he was taken on a plane to New York, to be prosecuted for three charges associated with drug trafficking.

Wow. We knew about his brother but the US supported his election fraud in exchange for their support of moving the US embassy in Israel to Jerusalem. Now they're trying to blame Trump. Hilary Clinton did the same thing. The problem is the CIA. They are the drug dealers.