BC Hells Angel charged in US stock fraud 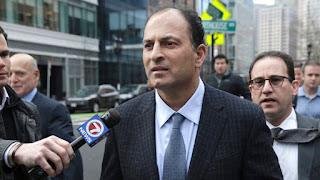 CTV is reporitng that "A member of British Columbia’s Hells Angels Nomads crew has been indicted in New York City on charges of fraud, conspiracy and money laundering in relation to an alleged pump-and-dump stock scheme. The district attorney for the Southern District of New York and the FBI announced Courtney Vasseur was one of 10 suspects facing criminal charges in relation to the alleged fraud. The 10 accused hail from Canada, the United Kingdom, Bulgaria, Spain, Monaco, Turkey and the Bahamas." Speaking of stock fraud, how is Tony Pires and Ralph Biggar doing? Oh right, they won't get busted in Canada because of the CFSEU.

Other possible Hells Angels links to defendants in court documents

If they keep busting them for money laundering in Casinos and stocks, that just means they're going to launder more through real estate which adversely affects all of us.