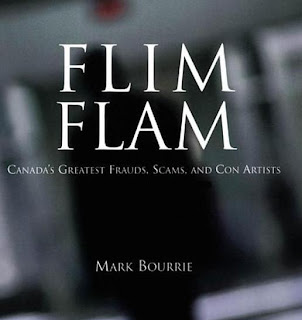 The article expresses his frustration trying to explain to Wally Oppal when he was the BC Attorney-General that the B.C. Securities Commission has not been able to contain the proliferation of Vancouver-related companies that are being floated on the lawless OTC Bulletin Board and "pinks sheets" in the United States. Talking to Wally the limp fish was like baning your head against a wall.

He cites 880 companies that have been perpetuating Vancouver's infamous sub-culture of chicanery, where crooks and accountants and lawyers and other professionals come together to produce stock market scams, most of which are foisted on investors in the United States, Germany, or other foreign countries. The net result is that Vancouver's reputation as a haven for scams is as bad as ever.

Despite the fact that we no longer have a Vancouver Stock Exchange because it was shut down for being corrupt. It was full of fake pump and dump scams. That's why we don't have a stock market in Vancouver any more.

Biggar is no stranger to bulletin board companies. In 2003, he set up Tora Technologies Inc., which has no appreciable assets except a services agreement with a Vancouver company called LA Embroidery Inc. The agreement gives Tora the right to market LA's custom embroidery services via the Internet. The owner of LA Embroidery is Tony Pires. For granting the rights, Pires was given 250,000 shares.

Pires is an interesting business partner, to say the least. He is a full-patch member of the Nomads, an elite chapter of the Hells Angels.

On Thursday, I asked Biggar whether he knows Pires is a member of the Hells Angel. He refused to answer, instead referring questions to his lawyer, Gary Snarch. But that didn't get me very far, either. "My advice is not to talk to you," said Snarch.

There are some interesting links between Tora Technologies and De Beira Goldfields. As mentioned, Biggar has been involved in both companies. In addition, Fronzo and Pires have been co-investors in two unrelated deals.

In 1999, they were among a half-dozen investors in a U.S. company called Value Software Inc. The same year, they participated in private placements in International En-R-Tech Inc., a Vancouver Stock Exchange company. Other investors included:

- Ronald Lising, a full-patch member of the East End chapter of the Hells Angels. In 2001, Lising and Pires' brother, Chico, were convicted of trafficking drugs through No. 5 Orange strip club and the Marble Arch Hotel. Each was sentenced to four and half years in jail.

- John Punko, another full-patch member of the East End chapter of the Hells Angels. In 2001, he was convicted of threatening the Crown counsel who was prosecuting Lising and Chico Pires on their drug trafficking charges.

The fact that Fronzo invested in these deals along with several Hells Angels may be entirely coincidental. I tried to ask him about this on Friday, but he did not return my phone calls.

Let's pause for a minute and consider the magnitude of what we are now looking at. A company called Grant Street Holdings Ltd. owns the Burnaby Nomands clubhouse. All the company's directors - Francesco (Frank) Amoretto, Bob Green, Tony Pires and Gino Zumpano - are well-known members of the Nomads. Green is listed as president of Grant Street Holdings, while Pires is secretary.

Technologies Inc was tied to LA Embroidery Inc which was owned by Tony Pires. Tora Technologies has links with De Beira Goldfields. In 1999 Fronzo and Pires were involved with U.S. company called Value Software Inc. along with John Punko and Ron Lising. Are we beginning to see the magnitude of the problem yet?

David Baines more recnelty reported on Ialta Industries Ltd. One of its major shareholders was Nomad Glen Jonathan Hehn. The settlement agreement notes that in January 2007, the B.C. Securities Commission issued a cease-trade order against Ialta for failure to file financial statements.

Baines also discusses a scam run by Marcel Rada who also became president of Montrose Exploration Ltdm of which Glen Hehn was the largest shareholder. Ralph Biggar, tied to Tora Technologies Inc, LA Embroidery Inc and Tony Pires, was also a shareholder in Montrose along with Glen Hehn.

Another good book about the scams of the Vancouver stock exchange is Flim Flam by Mark Bourrie. Investment fraud ruins pensions and destabilizes markets. When organized crime gets involved we should all take notice.