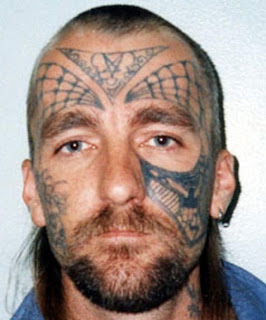 Hells Angels associate Ivan Andrew Campbell in New Zealand was sentenced to 14 years for the torture and rape of a 14 year old boy in 2001 and a 13 year old boy in 1991. In a separate case a stripper was gang raped and tortured in Australia.

Under legislation at the time of his sentencing, the heavily tattooed sex offender must be released after two-thirds of his sentence – meaning he is to be freed by January 5, 2010 at the latest. But the Department of Corrections has taken the rare step of applying for an order under Section 107 of the Parole Act 2002, to keep him in jail.