Diary of a Vancouver beat Cop 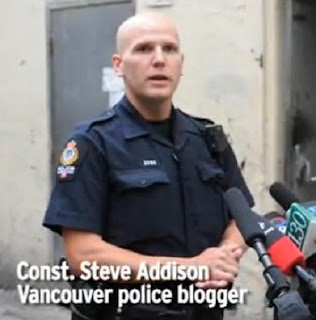 There's been a few stories in the news about a new blog by Steve Addison called Diary of a Vancouver beat Cop. It's being billed as a new voice for the Downtown Eastside.

He claims Members of the Vancouver Police Department have a history of being on the cutting edge when it comes to using media to educate and inform people about the tragic and wasted lives on the Downtown Eastside. Indeed they have.

Sgt. Toby Hinton, (Ret.) Const. Al Arsenault and the rest of the Odd Squad led the way with Through a Blue Lens, produced in 1999 by the National Film Board of Canada. The officers carried video cameras on the beat to document the existence of several Downtown Eastside residents and their fight to survive.

I think highlighting the problems of East Van is a good thing. I don't think handing out free crack pipes to mental patients on the street is the humane solution to closing down mental institutions.

The other extreme I'd like to cite is the concept that some police claim that the 'Void' in drug underworld cause of biker war in Winnipeg. Just as the VPD want to highlight the social problems in the Downtown East side, I want to highlight the misconceptions that enforcement is wrong and being enablers is right. That is absurd.

It had absolutely nothing to do with making Hells angel and Rock Machine arrests. If the Hells angels hadn't killed one of their own, they all would still be working for the Hells angels even after the Zig Zag crew were arrested.

Enforcement is not wrong. It is a civic duty. When you see the problems of the Downtown East Side you can see that enabling addiction is not humane. Giving an alcoholic alcohol is not the answer. Neither is letting the Hells angels have a monopoly on the drug trade and profit from all that exploitation.

The Hells Angels are recreating the social problems in the Downtown East side in smaller communities across the province and across the country. This greed driven exploitation needs to stop. We need to pull together to address the problem and over come it. It all begins with enforcement. That is the New York model. Letting crack dealers sell crack in public is morally wrong. We need to target the dealers not the addicts.

Posted by Dennis Watson at 2:53 AM