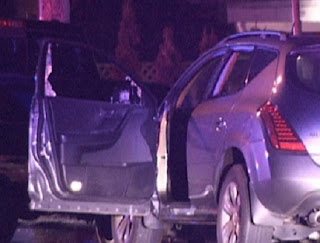 Well John was right. Another gang related shooting in Surrey last night. I drove right by around 10:30 PM and saw the police cars and the blocked off street. Didn't realize it was another shooting. I did notice CBC had camera crews outside the Pho Hoa restaurant on 104 Ave and 144 next to the Hen Long market around that time.

Everyone is wondering if it's in retaliation for the Kelowna shooting. The police aren't releasing his name or gang affiliations other than saying he is known to the police and does have gang affiliations. It sure doesn't look like we're making much progress from the Surrey Six murder. All these guys are still known to the police but not known to the public. Surely there is a legal liability the police are breaching in withholding that information. It's really sad we can't all just work together. Why withhold that information and put the public at risk?

Kim Bolan is reporting that the Duhre brothers in Abbotsford are denying involvement in the Kelowna shooting. Like they would admit it if they were involved. Even the Hells Angels deny when they are involved in a shooting. I really don't think it was them though. Kim is also reporting that Larry Amero has been flown out of the province to recuperate from the shooting. Back in the day, people joined gangs for protection. Now that it's all about selling crack, joining a gang is like wearing a t-shirt that says shoot me.

Wow. 1:00 PM Saturday and the police are still on the scene and the road is still blocked off. "Well known drug corner?" I'm not so sure about that. The 24-year-old has a history of police that stretches back to his late teens. Kim Bolan is reporting that When a gunman opened fire about 9:30 p.m. Friday, he was with others who have been the subject of police “duties to warn” because there are others out there that want them dead. The victim remains in critical condition. He is currently out on bail on trafficking charges