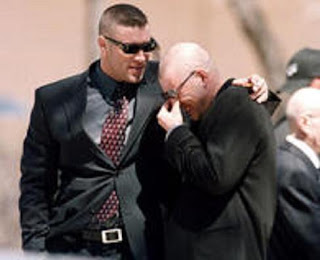 Dustin Paxton's trial is in the news. Paxton was smiling in the prisoner's box as Chutta testified. Today the Province reported Witness tells sexual torture trial of stick attacks on roommate. Well like that's not dramatic. It is a bizarre and tragic case, no question about it.

Dustin Ward Paxton used a 1.2-metre-long "bamboo stick" to slap his roommate's ears, and would scream swear words and derogatory comments at the bigger man as he smacked and kicked him, a witness testified Wednesday.

But the alleged victim, who apologized on his knees as the blows rained down, never struck back at the man he called his "blood brother," Robert Cannon told a Calgary court. This "new" witness, who seems to have a different name depending on which news article you read, claims he saw a great deal of physical abuse.

Why not phone the police then? I do recall hearing something about an anonymous 911 tip to the police that wasn't followed up on at the time. Two days ago the Province reported on the victim's former girlfriend's testimony in court. She is the mother of his child. We know who she is. I don't think there's a publication ban on her name but I won't risk it.

She said he was healthy and happy when he left Winnipeg to work with Paxton in Calgary. Soon after, he stopped answering her phone calls. Paxton told her the man had suffered a workplace accident and was in the hospital.

In the Calgary hospital, her ex-boyfriend was “very underweight. His eye socket was sunk in,” she testified before justice Sheila Martin. He had also dropped down to 120 pounds. When the victim was released from hospital, Paxton’s attitude became agitated and angry, the woman testified. He snapped at his roommate over everyday things, such as not properly putting away groceries, she said. Paxton once became so angry, he told the man to go to his room. “Mr. Paxton treated him like a piece of crap,” said the woman. She also claimed she asked him to leave and he said no. The other witness confirmed that in court.

The victim was dumped off at a hospital in Regina suffering horrific abuse. When the story first broke the traffic crashed my blog. There's something about torture that gets the public upset. Since there was such a delay in the arrest and trial there was a huge amount of speculations about what happened and why. The story was sent to me because the victim was originally a witness in an old Hells Angel murder trial.

A small kid named Trevor Savoie sold crack for the Hells Angels through the Zig Zag crew and a guy named Danny Tokarchuk that owed him money shot him dead to avoid paying the drug debt. Which wasn't necessarily a bright thing to do because the debt was ultimately to the Hells angels. He was convicted of murder and they also killed his brother in retaliation. There's a picture of Sean Wolfe comforting a man at Savoy's funeral.

In another trial the police testified that Deli, the Winnipeg Hells Angels president, was so upset about the murder of one of his beloved drug dealers he got a tattoo of the kid with his birth and death date as a memorial.

Paxton's victim's testimony in that trial was insignificant. He just testified that the shooter was a friend of his and his brothers and stayed in their home for a few days right after the shooting. He simply testified the shooter was acting very strange and feared for his life.

I am perfectly willing to concede that it is very possible that Dustin Paxton acted alone and was solely responsible for the torture and abuse inflicted upon the victim. Yet I still don't understand why the victim stayed in that home when he had opportunities to leave. For me, the threat of gang retaliation made sense. For others, they though he was in a gay relationship and was suffering from the battered wife syndrome. I thought that was absurd at the time but now we keep hearing the terms sexual assault whenever the case is discussed in court.

I just thought all the factors were so ironic. Winnipeg, Calgary Regina. Sean Wolfe, Deli, Tiny Mac. It all looked so suspicious. Especially when we heard drugs were involved in the Paxton case. Paxton's former girlfriend claimed the three of them were doing crystal meth. I'm not sure if we'll ever find out the real reason he didn't leave. Today's paper said Paxton threatened to kill him if he told anyone. Perhaps that's all it was. Yet I'm still not convinced there wasn't more to the story. Especially since crystal meth was involved.