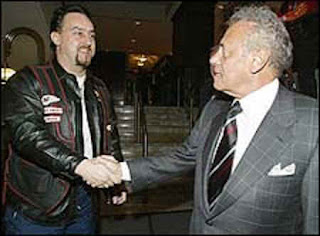 We know Julian Sher is on top of the situation. In this Globe and Mail article from July 17 2004 we read: The RCMP's criminal intelligence service has said for years that Canada's Hells Angels are involved in murder, drug trafficking, prostitution, illegal gambling, extortion, intimidation, fraud and theft. Much of that goes unreported, reflecting the enormous fear factor.

But the gang's primary moneymaker in Ontario is narcotics -- cocaine especially, but also homegrown marijuana and prescription drugs. Indeed, the Hells Angels bring to the drug trade what Wal-Mart brings to retailing -- economies of scale, better access to suppliers, a broad distribution network, an unbeatable brand -- and are funnelling more cocaine to the province's streets than ever before, police and drug-treatment experts say.

"When you arrest someone for drugs and ask who it's from, they say it's HA coke. Ninety per cent of the time it's HA coke," says a police officer in the Kitchener area, a Hells Angels stronghold. "I see more cocaine in our town."

The Globe and Mail has pieced together a picture of the network, a rare glimpse into the underground cocaine economy that thrives in Toronto and across the province, much of it under the control of the Hells Angels.

A Colombian drug trafficker named Reinaldo Trujillo supplied some of the cocaine that passed through the Bebops bar, according to court documents. But most of it came from the bikers' "Quebec connection," a steady stream of coke brought by car along Highway 401 from Montreal, where the Angels have long had a power base.

Times have changed. Five years ago, Ontario's outlaw bikers were scattered among a handful of gangs, such as the Satan's Choice, Outlaws and Para-Dice Riders, whose interests lay chiefly in motorcycle runs, small-scale drug trafficking and extortion. They jousted for position and occasionally clashed, but for the most part kept to themselves.

The ground began shifting in the late 1990s, when emissaries from the Quebec branch of the Hells Angels launched a methodical campaign to gather all of Ontario's bikers under the Angels' death's-head emblem. Heading up the membership drive was Hamilton-born Walter (Nurget) Stadnick, who was convicted in Montreal last month of drug trafficking, conspiracy to commit murder and gangsterism.

"The greatest myth the public has is that these individuals are motorcycle enthusiasts; they are not," says Detective Inspector Don Bell, head of the BEU. "This is sophisticated organized crime, people that you do not want in our community."

"But in the majority of major shipments of cocaine we find -- meaning loads of say, 20 kilos or 60 kilos -- when we peel back the layers we constantly find some level of involvement by the bikers. They have their hands in it at all levels: shipment, distribution, money collection."

That's in Southern and Central Ontario. Elsewhere in the province, there's less sharing. "In the north, the HA more or less control the market. It's red-and-white coke or no coke," says the BEU's Det. Insp. Bell, referring to the Hells Angels' colours.

That monopoly is reflected in the quality of the product. In Toronto, cocaine seizures commonly yield a drug that is 85-per-cent or even 90-per-cent pure. In Sudbury, Thunder Bay or Timmins, the purity can be as low as 25 per cent.

Data compiled by Toronto's Centre for Addiction and Mental Health paints a more disturbing picture. Cocaine abuse among Ontarians in Grades 7, 9 and 11 peaked in 1979, when 5.3 per cent admitted using the drug in the previous 12 months. Then came a steady decline, to a 1993 low of 1.5 per cent.

Detective Constable J. D. Lapell, a veteran drug officer with the Guelph detachment of the Ontario Provincial Police, says police across Southwestern Ontario are for the first time seeing an increase in the use of methamphetamine and powdered cocaine at high schools.

"And the information we're getting is that a lot of this goes back to the bikers, channelled through many sets of hands."

In 1997, the figure had edged up to 2.7 per cent -- roughly the same as with ecstasy use -- while the figure for marijuana was 25.9 per cent. By last year, among that same group, both ecstasy and marijuana use had increased slightly. But the rise in cocaine use was much more pronounced, almost double the 1997 figure, reaching 5.1 per cent.

Ed Adlaf, a research scientist at the centre, offers a twofold explanation for the recent jump. One is a diminished realization of the damage cocaine causes. The second, he says, is that there's far more cocaine on the street than there used to be. "More and more students are reporting easy availability, compared to the early 1990s."

George Siciliano, a Hells Angels "hangaround," made extensive use of his contacts with the gang to establish a drug network in Thunder Bay, court documents show. He bought cocaine and marijuana in British Columbia's Lower Mainland and shipped it east on cars, buses and airplanes. Distribution was through the Thunder Bay chapter of the Hells Angels and their associates.

In August of last year, police arrested Mr. Siciliano and seven other people in Northern Ontario and Vancouver. In January, he pleaded guilty to three drug-related charges in exchange for a 10-year prison sentence.

But the full scope of the Hells Angels' international ties, and the scale of their cocaine business in Ontario, came to light only in June of 2002, in the Kingston area, when police seized as astonishing 600 kg of cocaine.

On June 13 of that year, on the open ocean near the Grenadines and St. Vincent, RCMP agent Callen took delivery of the 600 kg of cocaine, compressed into book-sized bricks. The shipment had originated in Venezuela but was delivered by two well-dressed Colombians in a war canoe, guarded by a dozen men armed with Mac 10 and Uzi submachine guns.

Mr. Denault and a co-conspirator both told Mr. Callen the huge drug haul was destined for the Hells Angels, prosecutor Ron Sonley said before Mr. Denault was sentenced to a 15-year penitentiary term.

That really doesn't sound to me like the Hells angels are no longer a threat to public safety. Julian Sher's book The Road to Hell is the story of how the Hells have taken over the Canadian crime scene. 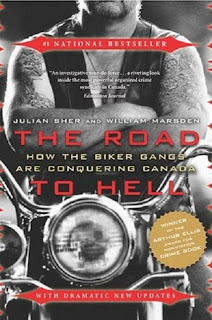 Posted by Dennis Watson at 4:28 AM