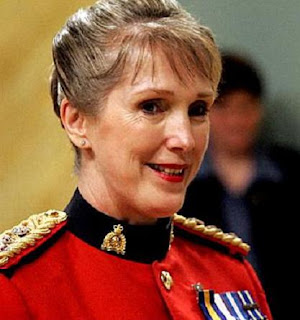 I'm not referring to Boy George Karma Chameleon. I'm referring to RCMP deputy commissioner Barbara George, who lost her job after being accused of perjury and becoming the public face of the Mounties’ pension-fund fiasco. She claimed she was collateral damage and was confident she would get her job back and she did.

In court documents, George alleges Chief Supt. Robert Paulson improperly began a criminal investigation into allegations she misled the committee and committed perjury. She argues "misleading" the committee would be a contempt of Parliament and "is punishable only by the House of Commons."

Can you believe that? The fact that it is unparliamentary to call someone a liar in the Canadian Parliament has always been a pet peeve of mine. Lying is OK. You can't get charged with perjury for lying in Parliament because that is protected by "parliamentary privilege". But God help you if you expose someone for lying in parliament. If you call a liar a liar in Parliament they will kick you out for telling the truth. That is our bizarre system.

I'm all for seeing a woman rise in the ranks of the RCMP finally. Yet I am very concerned with perjury and I am very concerned about using the argument in court not that she was innocent, but if she had committed perjury the RCMP's criminal investigation into her conduct was "unlawful and invalid" because the code of conduct and criminal investigations the RCMP initiated into her testimony "breach" parliamentary privilege. That is just plain crazy talk.

So basically she lied. Deputy Commissioner George testified with "absolute finality" that she had nothing to do with Staff Sgt. Frizzell's removal. The committee heard other witnesses, however, who insisted she did. Does Sergeant Frizzell get his job back now?

The RCMP investigator asked the MPs to waive parliamentary privilege on Deputy Commissioner George's testimony so it could be used as evidence in a criminal investigation and possible prosecution. He told MPs he felt her testimony was "deliberately false" and given with the "intent to mislead."

Instead the MPs voted and found her in contempt of parliament which basically means nothing criminally other than the fact that she did lie and was guilty of misleading Parliament. No big deal. Stephen Harper was found in contempt of parliament for refusing to disclose how much his fleet of oil bombing jets would cost to his insider's firm. Just another day in the House of Commons.

The point is, even if her perjury was not admissible outside of Parliament and she got her job back, she should not get the top job of being in charge of the entire RCMP. That would be wrong and it wouldn't help fix what really is broken at the RCMP.

Aside from the fact that Barb George lied in Parliament, we need to focus on what the RCMP Pension scandal was really about. Then we can figure out how to fix it and prevent it from happening again. Pension funds are sacred. We really need to stop letting politicians steal our pensions. It's a matter of trust.