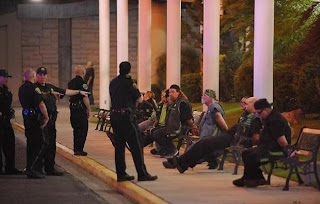 Another reader sent this one in. Jeffrey "Jethro" Pettigrew, the 51-year-old head of the Hells Angels San Jose chapter, was killed late Friday in a shootout that sent hotel guests and gamblers diving under tables at John Ascuaga's Nugget hotel-casino, police said. Two members of the Vagos gang also were wounded.

Witnesses to the casino shootout described chaos erupting after a group of Vagos club members was confronted by Hells Angels members at the Nugget. Daniel Sharp, of Stockton, Calif., told the Reno Gazette-Journal that within five minutes, shots rang out: "It was mayhem."

Joe Franco, of Reno, said he saw one Hells Angel member pull out a gun after he was knocked to the ground in a fistfight. "He was down with the bloody nose, gets up and pulls out the gun, and that's the first shot" apparently at the man who punched him, Franco told the Gazette-Journal. Sounds like self defense to me.

The Hells Angels picked a fight with Vagos because they think they own the world and no one else is allowed to wear colours but them. They lost the fist fight, so they pulled out the guns and lost the gun fight. That's self defense alright.

Posted by Dennis Watson at 4:50 AM