Asbestos in the Twin Towers 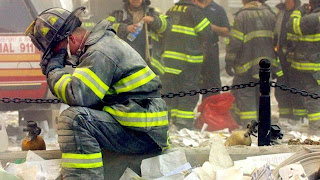 With all the media coverage of the tenth anniversary of 9/11 there has been a lot of talk about remembering the rescue workers and indeed we should. We should remember how they were put in harms way, were denied medical compensation and how they were exploited to make Haliburton rich. We really should remember that. Michael Moore talked about it in his movie Sicko.

The twin Towers were full of asbestos. Well half full. They stopped using asbestos half way through during their construction. Yet the Port Authority lost the court challenge forcing the insurance companies to pay for the asbestos removal. In the end the Port Authority had to pay for the asbestos removal themselves and were not allowed to demolish the towers because of the public health risk that would present.

Meanwhile back on the ranch, Michael Moore is reporting that Former Senator Bob Graham Urges Obama to Reopen Investigation into Saudi Role in 9/11 Attacks. Former Senator Graham – who co-chaired the Joint Congressional Inquiry into 9/11 in 2002 – writes that “the government of the United States has engaged in a sustained and effective campaign to keep the American public from knowing the truth. Still unanswered after nearly 10 years are the questions of the full extent of the Saudi pre-9/11 involvement,” Graham writes. “Why the cover-up by our government?”

It's pretty obvious. We all know most of the 9/11 terrorists came in through Saudi Arabia not Canada. In fact the CIA over ruled suspicious visa applications from Saudi Arabia on a regular basis. Like that's not suspicious.