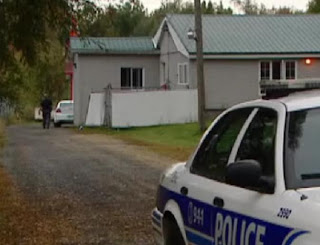 Meanwhile back in Ottawa police executed 16 search warrants, including one at the Hells Angels clubhouse at 5416 8 Line Rd. in south Ottawa. Police were seen taking away a Harley Davidson motorcycle and revealed they also confiscated illegal drugs, cash and weapons. There were 107 charges laid against 12 people including a 37-year-old Ottawa man police say is a full patch member of the Hells Angels. He faces five charges.

The exhaustive police probe that led to the arrest of a Hells Angels gang member and 11 of his associates began a year ago after the outlaw crew allegedly tried to expand its drug turf with violence on the streets of Ottawa, delivering severe public beatings to criminal rivals.

"We're talking about blatant, pretty severe public beatings," Ottawa police Insp. Samir Bhatnagar said Thursday. "We came across this group of people that was trying to take over certain areas in the drug trade and being overtly public with their message."

The Hells Angels Nomads chapter, based in Ottawa and led by Paul (Sasquatch) Porter, used to control much more of Ottawa's illegal drug market, and had started to flex its muscle to win back its lucrative and illegal drug business.

In the past few years, the Hells Angels, an international crime corporation in which chapters pay monthly franchise fees, had seen its share of the Ottawa drug trade diminish to less than 20 per cent.

Its violent bid for a bigger chunk of the market would be the undoing for Hells Angel Michael Clairoux, 37, and 11 of his associates, who did business across the city and in the suburbs. The Hells Angels drug trafficking operation, allegedly led by Clairoux, brought in as much as $400,000 a month, police said.

Clearly the Biker Enforcement Unit in Ontario has continued to make successful busts against the Hells Angels drug trade in Ontario. Perhaps we should borrow some of them for our drug plague in BC.