The Hells Angels control of the Ports 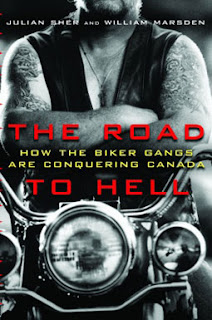 "Their drug-smuggling operations in Halifax, Montreal, and Vancouver were aided enormously by the federal government, which dismantled its ports police in the 1990s, despite strong warnings from major police forces, the provinces, and some of their own advisers. Authors Julian Sher and William Marsden of The Road to Hell: How the Biker Gangs Are Conquering Canada estimated in 2003 that forty-three Hells Angels and associates worked in the Port of Vancouver, at least eight of them as foremen and one as the training officer for longshoremen. Other gang members worked on docks in trucking, maintenance, laundry, and garbage service. While the Angels beefed up their presence in the ports, Ottawa simply walked away."

The Tyee wrote an article about an interview with Julian Sher, one of the authors of that book. "The Road to Hell recounts how the Angels brand-marketed their name, took control of nation's ports and the drug and sex trades. The book is now being used in courtrooms and by police as a guide to the inner workings of the gang in Canada."

The article cites the Stirling case where 2 1/2 tons of BC Hells angels cocaine was seized but no charges were laid. The article also claims "By Canada's own admission only three per cent of the shipments are actually checked. The Hells Angels realized this and have members working in the Vancouver ports and close associates working in Montreal and Halifax. In fact, the auditor-general's most recent report estimates that something like 4,000 people with ties to Canada's biker gangs and other gangs work at the country's major ports and airports."