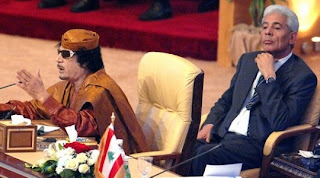 Is there a world dictator the CIA haven't trained and planted? Gaddaffi, Saddam Husein, Bin Laden. Can we see the pattern yet?

“Among the files we discovered at Moussa Koussa’s office is a fax from the CIA dated 2004 in which the CIA informs the Libyan government that they are in a position to capture and render Belhadj,” Human Rights Watch’s Peter Bouckaert, who was part of the group that found the stash, told Reuters.

“That operation actually took place. He was captured by the CIA in Asia and put on a secret flight back to Libya where he was interrogated and tortured by the Libyan security services.”

The files shed new light on the practice known as rendition, used by the United States under former President George W. Bush, in which the terrorism suspects were handed over to other countries for interrogation. Rights groups have criticized the United States for sending these suspects to countries where they were likely to be tortured.

George Bush authorizing torture. No big surprise there. At least Stephen Harper lied, fired the whistle blower and tried to cover it up. Not George W. He vetoed the bill that would have stopped the CIA from torturing prisoners in Guantanamo bay. You can't get any more war criminal than that. The Bush family is a stain on history.

In Washington, CIA spokeswoman Jennifer Youngblood, without commenting on any specific allegation or document, said: “It can’t come as a surprise that the Central Intelligence Agency works with foreign governments to help protect our country from terrorism and other deadly threats. That is exactly what we are expected to do.” Oh the cunning plan of the evil one.