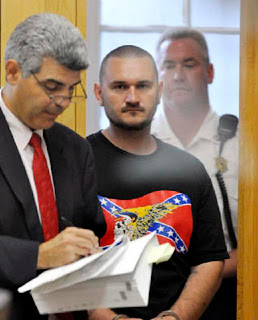 Adam Lee Hall, a member of the Pittsfield, Massachusetts Hells Angels is being held on $1 million cash bail on charges of child pornography and extortion, while the search continues for a key witness scheduled to testify against him in a separate upcoming criminal trial and two others.

Police and prosecutors allege Hall coerced a 16-year-old girl to send him lewd photographs of herself or else she wouldn't see her friend again. How noble. Extorting a 16 year old girl. Three witnesses who were to testify against him in another case are now missing.

The helmeted skull with devil horns on a Confederate flag. That's the same flag Wayne Kellestine proudly waved along with the Nazi flag. He's the guy who murdered his own brothers in the Bandidio Massacre. Adam Hall is just dripping with nobility isn't he? What's next, threatening someones grandmother?