Colonel Wing nut back in the news 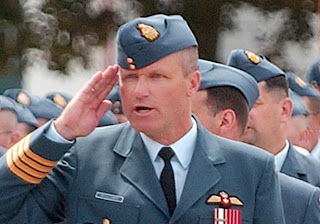 Colonel Wing nut has made the news again. This time because one of his victims is suing him for damages. Good for her. She has also named his ex wife and the police in the law suit. I'm not sure what his ex wife has to do with it. She had no idea she was married to a closet psychopath. She was no Karla Homolka. Perhaps his ex is named in case he signed over all his assets in his ex wife's name. The victim should be compensated by him.

The police are also named apparently for two reasons. The writ claims after the police responded to the 911 call she was left for five hours bound in an S&M trapeze he had tied her in before he raped her. That is somewhat bizarre. Five hours? They said they were waiting for a camera to take pictures. Making a rape victim wait for five hours before being untied is kinda strange.

Seemingly she is also suing the police because the police failed their duty of care when another woman was sexually assaulted in her neighbourhood two weeks earlier and they failed to make that assault public. I'm not sure if one attack would be considered a serial rapist but no doubt that assault should have been made known to the public.

Evidently another victim filed a similar law suit last year and named his ex wife because she had the house transferred into her name when he was arrested. Russell Williams plead guilty to more than 80 fetish break-and-enters, thefts and two sexual assaults.