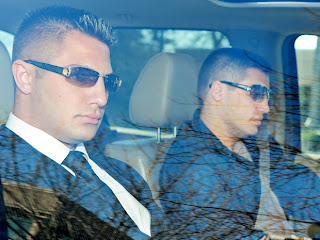 So Jared Bacon changes his mind and opts to be tried by a judge. I guess it's easier to threaten or bribe a single judge then a mob of angry citizens who hate him. Remember, this trial is for his cocaine charges. Bacon brothers, accused of selling cocaine, tied to the Hells Angels. Surprise, surprise.

Notorious Bacon brothers? Notoriously whacked. They're hated. People hate them because they are low lifes. People don't fear them. People fear standing beside them in case they get shot at. Spikey bleach blond prep.