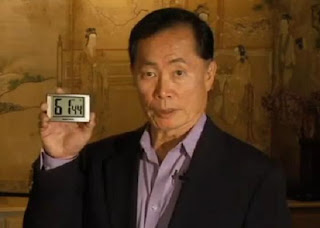 On a matter of personal privilege I will clarify that I don't really think Shane Bunting is gay, nor would a care if he was. I think he's an idiot and I think the false image the hells angels portray including one riddled with homophobic slurs is somewhat of a contradiction.

George Takei, the actor who played Mr Sulu in the famous series Star Trek recently spoke out about a really ignorant statement made by an Arkansas school board member. The member of the board said something outrageously offensive after a gay teenager committed suicide. The suicide was a tragedy yet the school board member had the audacity to say something to the effect of him being glad the kid committed suicide because he was gay. That was outrageous.

George Takei responded with a video posted on youtube where he called the guy a douche bag and made a prediction. He predicted the former school board member would get caught with a rent boy from some south American country then winked. He implied the guy was really gay himself. Was that a gay slur? Not really.

It is a strange commonality that paid minters and politicians who are so vocally anti gay over the pulpit end up getting caught with gay prostitutes. If find it a strange phenomena but Mr Takei's prediction has merit. Likewise I find the Hells Angels homophobia suspect.

Before I changed the blog comments to moderated, Hells Angel supporters would regularly call me gay and go on and on with homosexual slurs. I find the length they go to to portray a certain image very suspect.

I have received numerous complaints about Shane Bunting venues exploiting under age girls. In fact I've seen a picture of weird Hal Porteosu surrounding himself with very young girls. It's as though he's overcompensating for something. Nevertheless, Exploiting under age girls is far worse than being gay. What two consenting adults do behind closed doors is their business. Rape, whether it be heterosexual or gay is a heinous crime.

I am concerned about the Hells Angels selling drugs to the gay community. Crystal meth is a problem within the gay community that needs to be addressed. Letting the Hells Angels profit from that poison is wrong. Crystal meth is made with Drano. Sure a chemical reaction takes place but it's made with Drano and so many other toxic chemicals the police need to send in people with protective suites when busting a meth lab. We need to protect everyone in our community from the horrible effects of crystal meth.