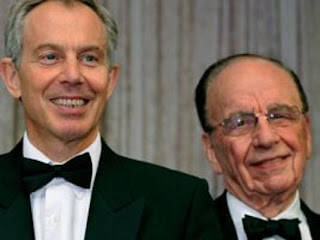 Well I'm getting tons of tips but I just wanted to throw two more tangents out there before they slip my mind. The Vancouver Province reported today that Tony Blair is godfather to one of Rupert Murdoch's young children, sources said Monday, raising fresh questions about British political links to the media mogul's empire.

Well, well, well. Isn't that cosy. Mr Congressional honour for supporting Bush's lie about Iraq's Weapons of Mass Destruction is tight with the controversial media mogul Rupert Murdoch. So tight Murdoch made Tony Blair the Godfather of his daughter. Somehow I doubt Tony Blair is Catholic. It must be a Church of England Godfather of sorts. (Turns out Tony Blair actually converted to the Catholic faith.)

Needless to say it does establish a close relationship between two scoundrels. A witness claimed that the wiretapping at the news agency was widespread and an accepted practice. We had heard that politicians were involved in the scandal and as soon as it was leaked out that police were involved, the whistle blower was found dead. Isn't that cosy Mr. BLiar? First Dr. David Kelly then Sean Hoare. Does that deserve another medal?

Ah but it gets better. The Vancouver Province reports that James Murdoch knows more than he admitted. Surprise surprise. Maybe they should recall James Murdoch and Tony blair to the stand. That that it would do any good. Just more lies and denial.

Phone hacking: timeline of the scandal - all the drama. Why is everyone so surprised? "They" aren't the only ones.

On another tangent, someone sent me this link about Harvard.