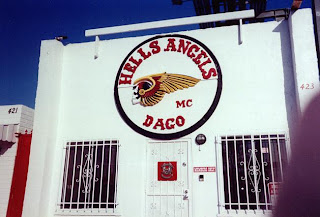 Speaking of Hells Angels and crystal meth, one reader just sent me the link to a recent drug bust in San Diego. Twenty-six members or associates of the Hells Angels motorcycle gang were arrested on drug charges during early morning raids Thursday by SWAT teams from the FBI and the San Diego and Oceanside police departments.

In addition to the 26 arrests, six people already in custody were charged and four suspects are considered fugitives, said Keith Slotter, special agent in charge of the FBI's San Diego office.

More than 250 law enforcement officers were involved in serving search and arrest warrants at 19 locations. During the searches, 10 firearms, thousands of dollars and several quantities of drugs were seized, officials said.

The suspects, charged with conspiracy to distribute methamphetamine, are set to be arraigned Friday in federal court.

Posted by Dennis Watson at 1:18 AM