OK this case just keeps getting more and more bizarre. First we heard that Adam Hall, the Sergeant at Arms for the Pittsfield, Massachusetts Hells Angels was being held on numerous charges, the most recent of which was threatening a 16 year old girl so she would send him nude photos of her. This was while he was waiting to be charged with kidnapping and extortion as the witness in that case had mysteriously disappeared.

Then we hear court affidavits claim he forced three women into prostitution and told them "You work for me now," he allegedly told one woman "There's no way out of it." One confidential informant told police the forced prostitution took place at the group's clubhouse on Woodland Road in Lee, according to the affidavit.

I thought that was the topper. Not yet. Three bodies have been found. Now we hear he's been charged in the murder of the witness that was going to testify against him along with two other co accused, David Chalue and Caius Veiovis. At first I thought the picture of the third guy on the right was some photo shopped picture the police got off facebook. The nose ring didn't even look real. But no, have a look at the picture close up: 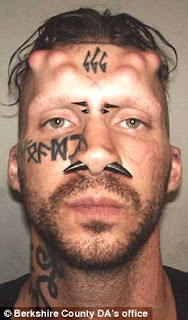 All of a sudden the nose piercing looks real, you can see the number 666 clearly tattooed on his forehead and what the hell are those bumps that look like horns? One blogger claims they're implants. That is insane. It doesn't look scary it looks sad. This isn't some 14 year old kid listening to heavy metal music wanting to freak out his parents. A grown man tattooing 666 on his forehead is ridiculous. Our French friend from the RM said 666 is just a number that comes after 665. Well this guy thinks it means something else and that is why he has a tattoo of it on his forehead. That is way worse than a finger and a thumb. It's a big double L for big time Loser.

I'm having a hard time believing those implants on his forehead are real. If they are, it spells stupidity. Why on earth would an adult pay for surgery to do that? Just for the record, the devil is refereed to as the father of all lies. No one likes a liar. Satan is the epitome of evil. Gang raping a young girl. Forcing her into a life of prostitution. Torturing and mutilating sex trade workers. These are the things the devil does. That is nothing to brag about. It's time these old men on Viagra grew up.

Well it turns out that devil horn implants do in fact exist. It just shows that our sick world just got a whole lot sicker. And I don't mean that in a good way.