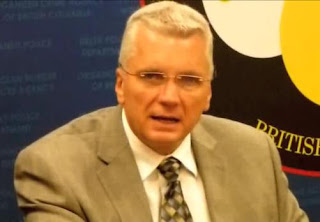 The police have issued a public gang warning that was featured on the front page of the Vancouver Sun, the Vancouver Province and the Surrey Leader. After the nit wit was shot in Surrey, the police are now publicly saying that anyone associated with the Duhre and Dhak gangs could be in danger. No kidding. They're selling drugs in the Hells Angels territory. I think the police do mean well, I just think they simply aren't getting it.

We've talked about legal liability and the police's duty to warn the public of known gang members like they would warn the public of a known sex offender. This "warning" doesn't fit the bill. I'll spell it out one more time but it's beginning to feel like banging my head against the wall.

Had the police issued a public warning about the Red Scorpions before the Surrey Six murder, that really would not have saved Chris Mohan's life. They didn't know Red Scorpions were living next door. To fulfill the police's duty to warn they have to name members of the gangs.

Obviously everyone on Cheech and Chong's Duhre Dhak list isn't safe. Well who are the members of the Duhre Dhak's drug network? If they are known to the police, they should be known to the public. If I'm told that someone I'm living next door to, or do business with, or someone my daughter is dating is a member of the Duhre Dhak drug network, then I can take measures to prevent being victimized by gang violence. If I don't know who the members of these gangs are, the warning is pointless.

I do think the police are worried about getting sued by gang members. In the printed edition of the Vancouver Province article there was a disclaimer about the police's warning was permitted because of the privacy act. Personally, I think they should put the entire Bar Watch Registry online just like Bait Cars dot com. Unfortunately, that might create law suits. Yet naming an individual and saying he has been charged with drug trafficking is not unlawful nor is it slander.

Darryl Plecas said that although the warning may not be useful to the public, It really is a sign that police are on top of this. Yeah right. Well they sure aren't on top of it when someone says the Hells Angels are no longer a threat to public safety and don't even have chapter status in Kelowna any more. That is so far out of touch with reality it is suspect.

How about a public warning that anyone standing next to Larry Amero or Hal Porteous is in danger of getting caught in the crossfire? If the police claim that the Duhre Daiquiri's are in opposition to the Hells Angels, then it's pretty obvious the Hells Angels are the ones putting the public at risk by shooting at these tools in public.

I say tools because Khun-Khun is an idiot. His own family doesn't trust him for good reason. His fiance mysteriously fell out of the car he was driving and died. He claimed it was an accident and his in laws didn't believe him. So he jumps in front of a truck in a suicide attempt. He said his deceased fiancee let him live and that was a sign. A sign from who? A sign that he's an idiot for jumping in front of a truck. This guy is not a high level drug dealer. The only connection the Duhre Daiquiri's might have to the Kelowna shooting is that they are buying their drugs off of the UN who are a lot more capable than they are.