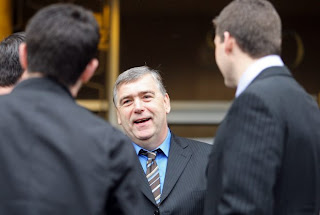 I noticed in Jeff Buziak's letter entitled Lawless: Beautiful British Columbia, he mentioned Ken Brotherston's case so I decided to look it up. Jeff Buziak stated the drug problem is so bad now he asked if it is time to take matters into our own hands and cited the Brotherston case. Wow. There's a lot to discuss.

First I'll answer the question then explain why. Is it time to take matters into our own hands? Yes it is, but that does not mean committing murder or perpetuating violence. It means reporting crack dealers and murders to the police.

Ken Brotherston was a city councilman on Vancouver Island. During the trial, for five weeks in November and December, witness after witness at the Victoria courthouse recounted details of life in the gritty drug underworld on the West Shore — how debts were owed, threats were made, drugs changed hands and people got hurt. The information was lurid; the allegations were sensational.

It would appear that the real problem that is not being addressed is the drug problem on the West Shore that is allowed to prosper with little or no interference. On one side we have police frustrated with a judicial system that does virtually nothing to chronic offenders who commit a huge amount of property crime to pay for their drug addiction. On the other side we have extremists lobbying City hall to hand out free crack pipes at the taxpayers expense. This enables the drug problems to fester into a gang war that is spilling over on to the streets.

I think this case shows us what our moral responsibility it. No I'm not saying our moral responsibility is to murder crack dealers. Crack dealers are a dime a dozen. The real problem is the people who are supplying the crack dealers and profiting from all that misery and violence. I'm not saying kill all Hells angels either. I'm saying the Hells angels are directly involved in the drug trade on Vancouver Island as well as in East Vancouver, Surrey, Kelowna, Vernon, Kamloops, Prince George and Dawson Creek. The Jones brothers indictment following the Robert Shannon conviction is proof of that.

We need to be honest about that and deal with that otherwise the Hells angels will keep finding new mules who will make them more money. As long as there is that much money to be made, they will fight and kill over the drug profits. I'm not saying legalize all drugs either. That would not stop the problem. It would only make an insanely difficult problem an impossible one.

Personally, I'd say Ken Brotherston is one lucky man. Not because he got way with murder, but because he or his sons weren't killed. Any 12 year old kid can pull a trigger. It would be pretty easy to shoot him dead. He is very lucky someone else present didn't have a gun and shoot him in the back.

I do think it is time to fight back. Police forces are often driven by statistics or should I say funded. Politicians are driven by statistics. They like to be able to report that crime is decreasing. That gives everyone the warm and fuzzy feeling that the police are doing their job. Yet the police can't do their job without the support of the community. That is why some of the younger members of the force are actually concerned about public trust and sincerely want to make things better. How noble.

Getting rid of crack dealers or a crack house is a very difficult thing. Entirely possible but very difficult requiring a consistent vigilant effort. The first step in getting rid of crack dealers is to note license plates and descriptions of those involved and report it to the police. Over and over again. Every time you see them out there selling crack call it in. The squeaky wheel gets the grease.

Vancouver City Hall were the ones who closed down the East Vancouver police station at night to suppress crime statistics. Yet suppressing the crime statistics shoots yourself in the foot because it reduces the fund set aside to help with the problem. Vancouver City Hall were also the ones who gave the Hells Angels and extra $2 million from the social housing budget when they over paid for the drake Hotel.

The Ken Brotherston case shows us it is out more duty to address the drug problem on the West Shore and in each one of our communities. Letting the Hells Angels have a monopoly on the drug trade is clearly not the answer. Power corrupts and absolute power corrupts absolutely. The Hells Angels are the ones profiting from the crack plague in Beautiful BC. It may not be the best place on earth but it is still beautiful and it's our home. That makes it worth fighting for. We have no place left to go.

We can't do everything but we can do something. The Lindsay Buziak murder is a shining example of why we have a moral obligation to try.