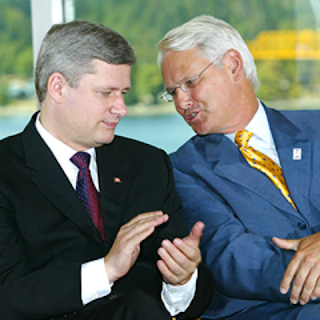 Oh right. The other insanity was the announcement that Gordon Campbell has been given the Order of British Columbia. The guy left office with a single digit approval rating. The lowest in the country. The Vancouver Province is reporting that hundreds of B.C. residents are joining an online protest over the government’s decision to award ex-premier Gordon Campbell with the Order of British Columbia. Stephen Harper just doesn't get it. Or maybe he does. He just doesn't care.

Of course the Order of British Columbia is a provincial appointment not a federal one. Like that's not one big conflict of interest. It's just insanely offensive they've given it to Gordon Campbell.

Turns out Surrey City Counselor Barbara Steele is the president of the UBCM (Union of B.C. Municipalities) and, as such, was part of the team accepting the nomination. Steele also ran for the Liberals under Campbell in Surrey-Whalley in the 2005 election, losing to the NDP's Bruce Ralston. I'd say that was a conflict of interest.