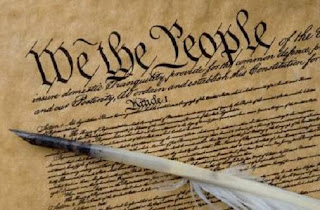 I was reading an old book called None Dare Call it Conspiracy. I guess you could call it old school tea party. Or at least what the Tea Party claims to represent. When Sarah Palin completely misquotes and misinterprets the Constitution I would definitely say Sarah Palin is not Tea Party. She’s just a cheer leader at a pep rally who has no idea what she's talking about.

The book could be considered extremely right wing and is very anti Commie. Yet it redefines Communism and warns that the real conspiracy is when the super rich try and sell us into a system of slavery under the lie of the redistribution of wealth. It’s like Alexander Solzhenitsyn’s discourse on Communism and how the founding premise of Workers of the World Unite is the fundamental lie of Communism. Lenin took over the party from Shliapnikov.

Solzhenitsyn claimed since the Revolution, there's never been such a thing as a free trade union. The least strike for pay or for better living conditions is viewed as counter-revolutionary. Workers went in a peaceful demonstration to the Party City Committee, carrying portraits of Lenin, to request a change in economic conditions. They fired at them with machine guns and dispersed the crowds with tanks. No family dared even to collect its wounded and dead, but all were taken away in secret by the authorities. In Germany second they came for the trade unionists. 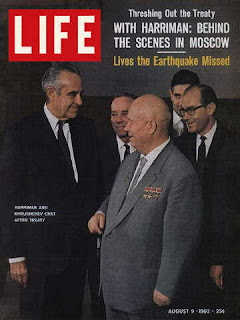 I’m going to cite the book since it mentions the Rockefellers and big business but I will twist it and sound a voice of warning about excessive privatization. The knee jerk response to a total government conspiracy is obviously less government. Privatize everything. Yet when we do so we lose public accountability and are letting ourselves become slaves to the large corporations and the super rich which is exactly what the constitutionalists try to avoid.

The book refers to an article published by the North American Newspaper Alliance in August of 1967 telling how the Rockefellers pay practically no income taxes despite their vast wealth. That is what I’ve been trying to get at. Just like Donald Trump.

Our problem is that most of us believe socialism is what the socialists want us to believe and is a share the wealth program. That is the theory. In the reality of socialism you have a tiny oligarchial clique at the top, usually numbering no more than three percent of the total population, controlling the total wealth, total production and the very lives of the other ninety-seven percent. Somewhat similar to the leaked Citibank Memo Michael Moore quoted establishing a Plutonomy. Isn't that Ironic. Those wealth seekers call Micheal Moore the Communist.

“If one understands that socialism is not a share-the Wealth program, but is in reality a method to consolidate and control the wealth, then the seeming paradox of super-rich men promoting socialism becomes no paradox at all. Instead it becomes the logical, even the perfect tool of power-seeking megalomaniacs. Communism, or more accurately, socialism, is not a movement of the downtrodden masses, but of the economic elite. The plan of the conspirator Insiders then is to socialize the United States, not to Communize it.”

In simpler terms we tend to view everything on a left right communist fascist plane. Well Hitler’s term for his fascism was National Socialism while Communism is referred to as International Socialism.

So in reality, the Right Wing extremists of today who seek to acquire wealth and avoid paying tax that everyone else has to pay are what this book refers to as Commies which is exactly what that group vocally points the finger at and denounces. Kinda like the born again preacher who publicly denounces homosexuality then gets caught with a gay prostitute. Somewhat problematic.

The book claims, "Communism" is not a movement of the downtrodden masses but is a movement created, manipulated and used by power-seeking billionaires in order to gain control over the world first by establishing socialist governments in the various nations and then consolidating them all through a "Great Merger," into an all-powerful world socialist super-state probably under the auspices of the United Nations.

Prof. Carroll Quigley of Harvard, Princeton and Georgetown Universities wrote a book disclosing international bankers' plan to control the world from behind the political and financial scenes. Quigley revealed plans of billionaires to establish dictatorship of the super-rich disguised as workers' democracies.

Page 324 states "The powers of financial capitalism had another far-reaching aim, nothing less than to create a world system of financial control in private hands able to dominate the political system of each country and the economy of the world as a whole. This system was to be controlled in a feudalist fashion by the central banks of the world acting in concert, by secret agreements arrived at in frequent private meetings and conferences. The apex of the system was to be the Bank for International Settlements in Basle, Switzerland, a private bank owned and controlled by the world's central banks which were themselves private corporations. Each central bank sought to dominate its government by its ability to control Treasury loans, to manipulate foreign exchanges, to influence the level of economic activity in the country, and to influence cooperative politicians by subsequent economic rewards in the business world."

J. P. Morgan created artificial panic used as an excuse to pass Federal Reserve Act. Morgan was instrumental in pushing the U.S. into WWI to protect his loans to British government. He financed Socialist groups to create an all-powerful centralized government which international bankers would control at the apex from behind the scenes. After his death, his partners helped finance the Bolshevik Revolution in Russia.

And, curiously enough, the Federal Reserve System has never been audited and has firmly resisted all attempts by House Banking Committee Chairman Wright Patman to have it audited. (N. Y. Times, Sept.14, 1967.)

The book goes on to discuss the amount of interest on the National debt the banks make as well as concerns about the stock market. It’s an interesting read so it is. 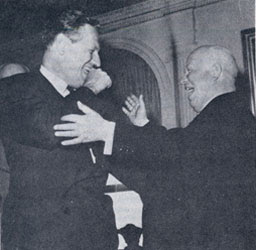 There are two great ironies in the book. The fist is the bankers and the super rich's desire to exploit people further through Communism. The second irony is all the flag waving anti communist rhetoric they spew to do so. As they pass legislation that erodes and replaces the safeguards against dictatorships found in the Constitution. After all in Germany, first they came for the Socialists. Hitler's conclusion was the same as Stalin's.