The Cocaine Connection to the Bassi Virk Case 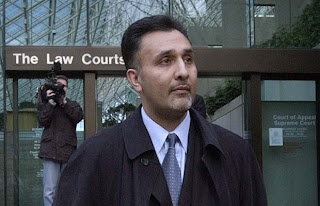 OK this has been bugging me for a while but I think I've finally found the connection. We've all heard about the BC Rail scam tied to Christy Clark's brother Bruce. The part that interested me was how the investigation that resulted in search warrants for two MLAs started over a drug investigation tied to organized crime.

We know their plea bargain cut the investigation short but all in all, Basi's cousin Jasmohan Singh Bains was convicted of cocaine traficking. Bains headed a Victoria-based group that shipped kilograms of cocaine to Metro Toronto and remitted cash back via Federal Express. His trial last summer focused on one shipment of 12 kilos, worth about $400,000, and Bains's boast that he could supply 50 kilos a week.

Although the drug ring was significant in size and was tied to organized crime, the nutty judge declared Bains was the initiator, the driving force, and the chief executive officer of the trafficking enterprise, and he answered to no other person. Yeah right. That doesn't even make sense but whatever. The point was Basi's cousin was convicted of cocaine trafficking.

Police became interested in former Liberal insider Dave Basi when numerous calls were made to his cellphone from Bains, his cousin. So he got a few calls from his cousin. That in itself is not earth shattering. However, Tips from an informant suggested Basi was laundering money for Bains by purchasing real estate, which is very significant. Those charges appear to have been dropped after Basi plead out to the BC Rail scandal.

Another cousin, Aneal Basi, who worked as a government media analyst, is accused of money laundering for allegedly accepting cheques from Erik Bornmann, then a partner in the lobbying firm Pilothouse, and transferring funds to Basi. Erik Bornmann in his statement to RCMP alleged that Bruce Clark, brother of then Deputy Premier (and current Premier) Christy Clark, bribed David Basi. Bribes for documents is one with but money laundering is another.

Hey, wait a minute. Didn't Paul Martin own a shipping line that was found to carry cocaine? Police in Nova Scotia discovered 83 kilograms of cocaine on a ship that is owned by Prime Minister Paul Martin's sons and named after Martin's wife. And Alfonso Gagliano said, Forget about it. 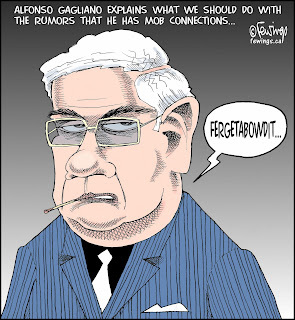 Looks like there was a Surrey connection too: Jaspal (Tony) Singh and Mandeep Sandhu were charged with conspiracy to traffic marijuana between Sept. 30 and Dec. 9, 2003 and with possessing marijuana for the purpose of trafficking on Oct. 9, 2003. The case involved a total of six kilograms of marijuana seized from a Surrey warehouse.

Former Victoria police constable Ravinder (Rob) Dosanjh was convicted of obstruction of justice last October in Vancouver provincial court. He was found guilty of counselling his cousin Sandhu to make false statements to police about the origin of funds seized from Sandhu’s residence. He received a conditional sentence of house arrest.

Dave Basi had been charged with the production and possession of marijuana after police found a grow operation in a home he owned but rented out at Shawnigan Lake, about 20 kilometres north of Victoria. Those charges were stayed June 30, 2005, by the federal Crown.