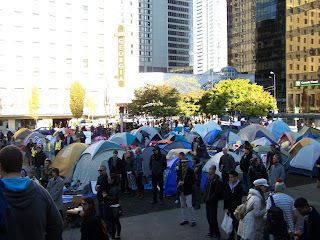 Day two and more tents are up as the protest continues. There was a brief break in speakers for some song and dance. They played you say you want a revolution by the Beatles as well as a few other non violent activist songs. Turns out New York has a live stream for their protest and Julian Assange spoke at the London protest. An interesting thought from Toronto: 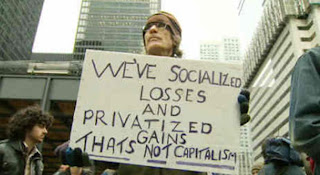 Here's another valid point coming out of New York: 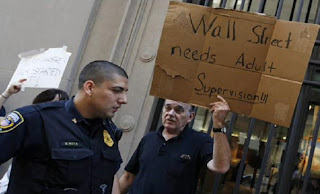 Wall Street does need Adult Supervision. Finance Minister Jim Flaherty is defending Ottawa's record on banking regulations. Banking regulation is not a dirty work. The right though the less red tape the better chances a free market has to succeed. In reality, deregulating the banks just paved the way for more investment fraud. That is the key.

I know every time we have a protest the Marxist Leninist party shows up and I know everybody thinks it's cool to wear a Che Guevara T-Shirt but we need to be mindful of how sometimes the devil we know as bad as it is, is better than the Devil we don't know. Let us remember Poland.

Now let's remember how Poland was royally screwed. Lenin promised to help "liberate" Poland from the Fascists. He told the Polish underground resistance to attack from within and they would attack from the outside and outflank the Nazi enemy and liberate Poland.

Well the Polish resistance did indeed strike but Lenin held back until all the resistance were pretty much destroyed by the Nazi's. Then, when the underground was exterminated and the Nazi's weakened, Lenin sent his troops in to take over and bring Poland into bondage not into Liberation. That is an important part of history to remember. We need to address the fraud in Wall Street but we don't need to throw out the baby with the bath water.