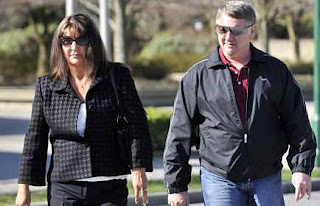 Locally, Jarrod Bacon's parents and the mother of his child were drawn into the accused's alleged cocaine conspiracy, a judge heard Tuesday. Bacon, 28, and Arnold Wayne Scott, 55, have each pleaded not guilty to one count of conspiring to traffic cocaine in Abbotsford and elsewhere in B.C.

After Bacon indicated he had up to $3 million in financial backing to buy and then traffic up to 30 kilograms of cocaine a week, police tried to arrange the first transaction of 10 kg. In the weeks leading up to the transaction, Scott passed on information to his daughter, Carly Scott, to forward on to Bacon himself, court heard. Carly is the mother of Bacon's child.

Later in August 2009, on the day of the transaction, Scott was captured on police intercepts discussing the drug deal with G.L., prosecutor Peter LaPrairie said in his opening statement Tuesday. Scott told G.L. that on the previous day he had met Bacon at Scott's residence in Abbotsford to discuss the transaction, LaPrairie said. "Mr. Scott indicated that Mr. Bacon's parents were present for the meeting and they indicated suggestions for how to carry out the transactions." What a deranged family.