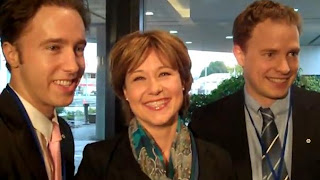 Evidently the term the Christy Clark is becoming synonymous with the term con job. We had high hopes for Chritsy. Those hopes have been shattered. She was a good talk radio host. Maybe she'd be better off like Sarah Palin on some reality TV show instead of in government.

This video clip from a reporter with the George Straight blows my mind. It's a reporter from a newspaper asking for an interview. Instead of answering any questions she completely ignores him and keeps smiling for the photo shoot. Holy brain dead airheads batman that was rude.

So far her term in office has been nothing but smiles and giggles posing in a Canucks jersey and handing out free candy. I guess she figures that getting elected to be the head of the Liberal party makes her the queen. She doesn't have to say anything intelligent she just has to keep smiling and giggling like an airhead. I find this immensely offensive given the venue she was smiling at.

People are outside protesting George Bush's presence because of his support of torture and she is ignoring the concerns and grinning ear in support of those heinous acts mocking those genuine concerns. That is exactly what she's doing. That is so disappointing. What on earth is happening to our provincial politics? Giggle and smile for the cold hearted bastards that raise taxes more than the left's wildest imaginations and spend it on themselves. Tragic indeed.

Evidently, after larger than expected crowds flooded into Vancouver in Game 1 of the Stanley Cup final, Mayor Gregor Robertson wrote to Premier Christy Clark pleading for extra police funding to ensure “safe and fun celebrations” — and Clark turned him down.

She said she can appreciate that such events do entail extra police attention to ensure public safety,” but “we currently ... have no plans to make further contributions to policing costs for special events.”

“I have noted your request for additional funding for policing based on the nature of this extraordinary public event,” Clark wrote. “I want to ensure you that your comments and those of Chief Constable Chu have been given every consideration during our discussions and in our review of existing contributions.” Smile and giggles as the city burns. What a freaking airhead. Exactly what the Campbell Crusade wanted. A poster girl for Campbell's insanity. God help us.

Incidentally Mayor Gregor Robertson is promising more police if reelected. Imagine that. Harper promised to get tough on crime then cut funding for the RCMP. Now after he plans on spending all that money on way more jets than we need for a contract with one of his candidates lobbyist groups he's freezing funding for the military. Now he's going to screw up the military after overspending on more equipment than we needed. Having a few fighter jets for self protection is one thing but a whole fleet to a company his candidate lobbied for? That is conflicted. That's what we call a neo con. They say one thing and do another. Kinda like claiming the other guys are the ones who are going to raise taxes. Yeah right. We've heard that one before Lyin Brian.

Provincially all I see is a traditional conservative like John Cummings who opposes the gas tax or a left wing social conscience who cares about crime, small business and opposes the HST. Right now I just don't see any middle ground in BC. The Christy Crunch has proven that. Sickly sweet with a very bad after taste.