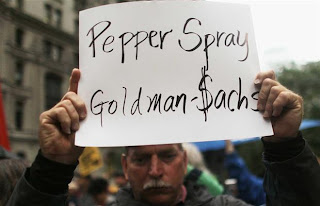 The US Wall Street protest is expanding across the United States as well as Canada. It started in New York where 700 peaceful protesters were arrested for walking on the street not the sidewalk. A rather disturbing scene in a nation where the Constitution guaranteeing the right to lawful Assembly is the highest law of the land.

I heard news of them planning one for Vancouver and I said what sock exchange? Vancouver doesn't have a stock exchange any more. They disband it because of corruption. It was full of fake pump and dump stocks so they got rid of it. I understand they are planning to occupy the Vancouver Art Gallery instead. Since that occupation won't affect the financial district there's no doubt that occupation could very well last through winter.

There is one point I'd like to make. Although I most certainly don't speak for everyone showing up to protest, this isn't about poor people being jealous of rich people and wanting to share the wealth. This is about the various financial crisis' which has been the result of investment fraud that has required huge tax payer bailouts.

In England there have been massive protests because the money spent on wars of aggression and financial bailouts has created huge deficits just like it has in the United States. They are now on a slash and burn campaign to destroy all public services that took years to build as a result. The primary cause of this chaos is investment fraud. White Collar crime going unpunished. Al Martin discussed it at great lengths in his book the Conspirators.

Michael Moore recently discussed the control and conflict of interest the banking industry has in the government. Henry Paulson was the former CEO of Goldman Sachs and became the US treasury secretary under George W. Bush. Many felt issuing the bank bail out was a huge conflict of interest.

It is clear that the various financial crises are artificially created and are the result of investment fraud as well as money laundering, drug smuggling and arms dealing. That is what was behind the BCCI collapse. If a free market is free, it doesn't require tax payers bailouts. Investment fraud is a serious crime because it wipes out pensions, destabilizes the market and adversely affects the economy.