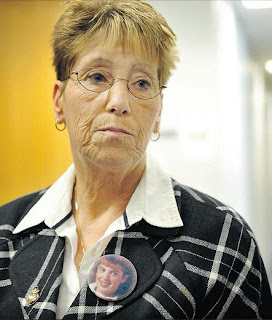 A disturbing new development at the Pickton inquiry. Lynn Frey, the step mother of one of the murder victims found on the Pickton farm, took the stand at the Missing Women Commission of Inquiry on Monday to insist she told Vancouver police about the farm belonging to killer Robert Pickton years before he was arrested.

Frey said after what she felt was "indifference" from Campbell River RCMP and the VPD, she finally found a "caring, compassionate" police officer, Vancouver Det. Const. Lori Shenher, who was assigned to missing persons.

But lawyer David Crossin, acting for the Vancouver Police Union and Shenher, told Frey in cross-examination that Shenher "has no record in her notes" of ever being told by Frey about the pig farm. Frey replied, to loud applause from the audience, that police were covering up.

"There's a big cover up here, I know what I said," Frey insisted.

The lawyer for the Vancouver Police Union said Shenher "has no record in her notes" of ever being told by Frey about the pig farm. Wow. That is disheartening. Like who's side is this guy on? I am starting to wonder if the cover up involves more than indifference over missing sex trade workers.

We know that the Hells Angels attended parties on site at Piggy's Palace. We know they tried to deny this but witnesses confirmed they were there all the time. In fact the court was told the Hells Angels ran a grow op on site. But there's more.

Some claim police officers also attended parties at Piggy's palace. At first I sluffed that off as nonsense, but now I'm beginning to wonder. Corruption can enter any organization. We saw it infiltrate the bench in Prince George. Judge Ramsay was convicted of violent sexual assault of under age native women. There was a huge cover up of that case before it went to trial and he was convicted.

The Globe and Mail is reporting that the inquiry will hear that off-duty officers “frequented” Piggy’s Palace, Mr. Ward said, without elaborating on whether the police were undercover or not. Those are some pretty significant allegations.

The are some pretty extreme and dramatic allegations of police officers involved in raping prostitutes and doing all sorts of twisted things. If I'm not mistaken the Picktom inquiry recently heard testimony from one witness who claimed she was a prostitute and was blackmailed by members of the VPD forcing her to have sex with them or they would arrest her. I am concerned how deep the cover up has gone. Evidently those allegations at the time fell on deaf ears.

It reminds me of the story about RCMP officers getting caught trying to smuggle a prostitute onto a cruise ship in a hockey bag during the Olympics. That one was denied and swept under the carpet. Yet there were two officers "investigated" for sexual assault of other female officers during the Olympics. We even had our own Colonel Wing Nut out in Revelstoke several years ago.

A reporter recently said they distinctly remember hearing on the radio news of a huge Hells angels drugs and guns bust around the time Pickton was arrested. All of a sudden, those charges were dropped and Pickton was given up along with the location of several bodies. Robert's brother Dave, who was a Hells Angels associate at the time, according to Robert's lawyer, knew where the bodies were buried and told the police shortly thereafter.