Another Quebec drug raid tied to the Hells Angels 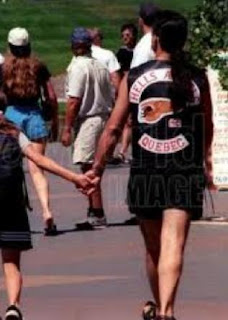 Following an early-morning series of police raids Thursday in the Monteregie region east of Montreal, at least 15 suspects were expected to appear in court later in the day to face drug- and firearms-related charges.

Sgt. Valerie Bolduc said it was as part of an effort to dismantle what she described as "a well-established, long-standing drug ring . . . believed to involve the Hells Angels" motorcycle gang. One of those detained was a man in his 50s, who police allege is the ringleader. The ring is believed to have distributed and sold cannabis, cocaine and methamphetamines, Bolduc added. Pot, cocaine and crystal meth. Imagine that.

Several marijuana grow-op sites were busted and at least one restricted firearm was seized as police conducted eight early-morning raids with a Hells Angels connection. Hells angels running grow ops? Imagine that. Having a grow op in one thing. Taking them over with violence is another. It's time to ban the bullies.