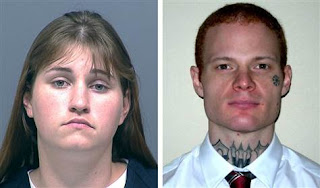 A white supremacist couple suspected of committing four murders across the Pacific Northwest on their way to "kill more Jews" in Sacramento were ordered held in California on Tuesday until extradited to Washington state.

The couple, David Joseph Pedersen, 31, and Holly Grigsby, 24, were arrested last Wednesday in Northern California, capping what authorities said was a two-week, three-state crime spree that began in the Puget Sound city of Everett, Washington.

Both face charges of aggravated first-degree murder in Washington state over the stabbing death of Pedersen's 69-year-old stepmother and the shooting death of his father, aged 56. Both were slain last month. Apparently his father's body was found in his SUV.

They have also been charged in the murder of Cody Myers, from Oregon. They were arrested while driving Cody Myers's car.

I find the rise of deranged neo Nazi's who commit violent criminal acts including the murder of their own family members as well as complete strangers disturbing. In Calgary, Robert Reitmeier is another neo Nazi accused of murdering Mark Mariani in a random attack. This is what we went overseas in the trenches to fight against. There is no place for this evil here. 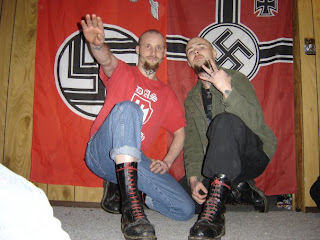