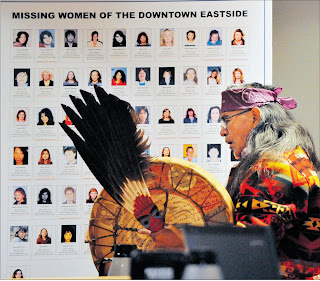 The Vancouver Province is reporting that the Pickton Missing Women Inquiry is off to a fiery start. The headline on the front page read: "Breathtaking Incompetence." Looks like the distraction is all about venting on the police for taking so long to find the mass murderer. Not a word was said about the others who may have been involved.

Robert Pickton was originally charged with 6 murders. The crown held in reserve another 20 charges in case his conviction on the original 6 charges wasn't upheld. His conviction was upheld after appeal so the other 20 charges weren't pursued because it wouldn't have seen him serve any more time in jail.

Take a look at the wall in the background of the first picture. The title states "Missing Women of the Downtown East side." I count 61 on the wall not 26. Are we going to blame Robert Pickton for the murder of everyone missing from the downtown East side? His conviction on the six murders was upheld because the jury was told he could be convicted even if he wasn't the primary party. They were told he could be convicted even if he was just an active participant. That direction to the jury was appealed and upheld and opened Pandora's box. Did Robert Pickton not act alone?

That is what the Inquiry should be about. Instead we see the smoke and mirrors drama blaming the police for not taking the investigation seriously enough at the time and delaying the conviction of the murderer. The real focus of the inquiry should be examining the evidence that implied others were involved now that the publication ban has been lifted.

Dave Pickton knew where the bodies were buried. He cut a deal and told the police where they were buried so the police wouldn't dig up his whole farm. Dave Pickton was a Hells angels associate. So the defence claimed. The Hells Angels not only attended parties at Piggy's Palace, they ran the bar. They had a grow op on site. So the court was told. What else was the court told? These are very important facts that need to be part of the public inquiry.

One reporter contacted me and said they distinctly remember hearing in the news a huge Hells Angels drug and weapons bust right before Pickton was formally charged. They claimed that nothing was heard about that bust ever again and shortly thereafter Robert Pickton was given up to take the fall for the murders. Interesting timing indeed.

An Editorial in the Vancouver Province complained about the use of a First Nations blessing to kick off the inquiry. Where's your respect for our cultural heritage? Chinatown may well be the heartbeat of Vancouver but First Nations is the Ancestral Spirit of Vancouver. A large portion of the missing women from the Downtown East side are Aboriginal Women. David Ramsay was a court Judge in Prince George who was convicted of abusing under age Aboriginal prostitutes.

Wally Opal wearing an Aboriginal blanket is not a breech of impartiality, it's a sign of respect for the cultural traditions of those murdered. Eileen Mohan held a birthday Mass in memory of her son who was murdered in Surrey. It's sign of respect. The problem is Wally Opal was the wrong choice. He was the Attorney General of BC. He's a former court judge himself. He was a limp fish enabling the judicial dilution of justice. Him chastising anyone including the police for dragging their heels in this case is nothing but ironic.