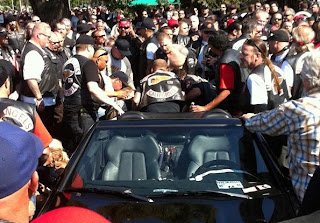 Despite a heavy police presence at a Hells Angels funeral in San Jose on Saturday, a top bike-club enforcer nicknamed "Mr. 187'' after the state penal code number for murder was gunned down Saturday in front of stunned spectators.

Multiple sources told this newspaper the victim was Steve Tausan, a notorious sergeant-at-arms for the Santa Cruz chapter of the club suspected of killing another biker years ago.

San Jose police would not confirm the identity of the shooting victim, but did report that he was pronounced dead at a hospital at 1:44 p.m. Sources said the incident Saturday was an inter-club squabble set off when Tausan punched a fellow biker and the biker retaliated by shooting him. Police have no suspect in custody but are interviewing several witnesses, according to San Jose police spokesman Jose Garcia.

The funeral at the Oak Hill Cemetery was for fellow Hells Angel Jethro Pettigrew, president of the San Jose chapter of the club, who was shot in a Sparks, Nev.