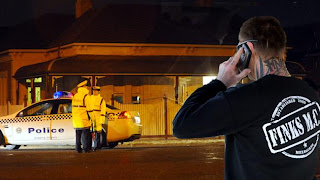 The son of a member of a local biker gang in Australia called the Finks was shot twice during a home invasion which ransacked the house. Earlier that day the father was in court supporting fellow Finks members who were charged for being involved in a bawl with Hells Angels members at a nightclub earlier this year.

Obviously the Hells angels are the instigators in this violence. Chris Hudson was the guy who was caught on video pulling an ex girlfriends hair, dragging her outside, throwing her to the ground and kicking her in the head. Later that day he was seen dragging his girlfriend in public. When a Dutch Baker packer and a local lawyer came to her aid, he pulled out a gun and shot all three, emptying the clip into the lawyer as he lay on the ground who was a father of three. 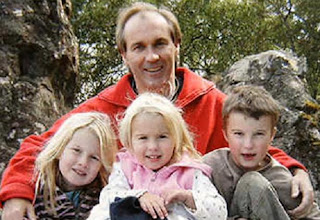 So, here we have the Hells Angels as the instigators of violence. They patched over a local member and tell the original club to join them or leave town. Now we see the Hells angels break a cardinal rule and shoot a guy's son. That is cheap, dirty, pathetic and obscene.

I will add that two wrongs don't make a right. I'm not talking about retaliation for shooting the son. That's a given. I'm talking about the real reason for the violence. The Hells angels are trying to take over the local drug trade. Fighting a war, either side, for the right to sell crack is deranged. There is no nobility in it. 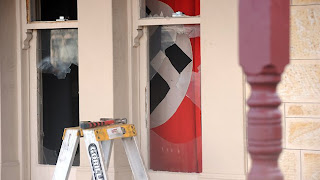 I will add that there appears to be a Nazi flag hanging inside the window of the home of the Finks biker who's son was shot. Why is it that Nazi bikers always murder each other? Is it because they all want to be the one dictator and have everyone serve them? That's sure what it looks like. The Germans were conned. They didn't realize what was happening to the Jews until it was too late.

Flying a Nazi flag now is an offense to the Canadian and the Australian military. It represents racism and genocide. It represents the surrender of liberty. It mocks the solders who fell at Normandy and the Australians who fell at Gallipoli. It also mocks the French who's country was invaded by the Nazi's requiring the sacrifice of all those noble soldiers to liberate it. Buyer Beware.