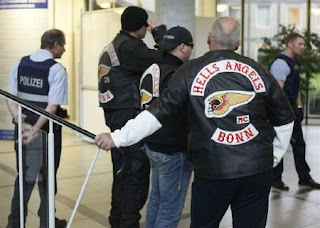 Another reader sent this in: Citing a history of weapons offences and violence, a German state banned two Frankfurt-based chapters of the Hells Angels on Friday and confiscated their assets. "A German State." Sounds like it was provincial legislation not federal. Now there's an idea.

"These gangs are not in any way made up only of harmless motorbike riders," Hesse state interior minister Boris Rhein said at a televised news conference. "Many members are known to the police because of violent, drug or weapon-related offences." The interior ministry said it had the authority to ban clubs when their aims or activities break the law.

I'm all for the freedom of association. Yet that charter right does not include the right to belong to a criminal organization. Obviously we have to be careful of how we approach such legislation. As long as there is a long list of documented criminal activity then a ban is clearly in order. Calling a labour activist a terrorist just so the government can spy on him without a warrant is not acceptable. Happens all the time, but it shouldn't. I oppose warranties surveillance.

Yet with the long list of documented criminal activity in Canada there is no reason the Hells Angels can't be deemed a criminal organization in Canada within the criminal code. They had a committee set up to discuss that possibility but it looks like they dropped the ball after the got their coveted majority. Now the only people that will do real time in prison are pot growers. Rapists and cocaine dealers will get a slap on the wrist. Now that is tragic.

I think it's also important to recognize how the Hells angels use a web of puppet clubs to sell their drugs for them to hide their involvement. The Zig Zag crew were caught selling crack for the Hells angels in Winnipeg and paid them dues for protection. Just like the Rockers in Quebec.

After the Zig Zag crew were busted then they started LHS which was disbanded when they shot one of their own guys to let the Ontario Hells Angels take over the drug trade in Thompson. Then they formed the Redline Support Crew to fight the Rock Machine and their puppet club Vendettas for the drug trade in Winnipeg. Then they also created the Freewheelers MC which is being pushed aside by their creation of the Heretics. These guys burn through puppet clubs fasted than an addict goes through crack pipes.

Back East after the Hells Angels were deemed a criminal organization and had their clubhouse seized, all of a sudden the Darksiders found the cash to open their own clubhouse in one "formally" owned by the Hells Angels.