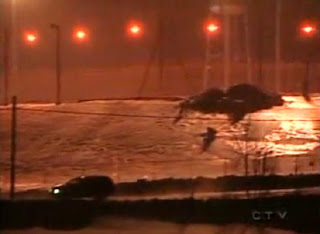 Management at a Manitoba prison has opened an exercise yard for inmates that invites passersby to toss drugs over the fence. Gee I wonder if that's Stony Mountain prison where Deli and Sean Wolfe are staying? Yup sure is.

CTV even caught a drug toss on camera. The drug trade is alive and well in prison. Still. Ya think Mr. Harper would spend some coin on fixing that problem before he builds more prisons and fills them with pot growers. I guess Stony Mounted institution has been renamed to Stoned Mountain.

"I think they're afraid of what the inmate response will be if they close it. You cut off the drug supply and of course they're going to be pissed off." Grabowsky said. You have got to be kidding. The powers that be are afraid of upsetting the inmates if it cuts off their drug supply. Who's in charge here any ways?

Last August an employee was charged with bringing drugs into Stony Mountain. Let's not forget that fatal drug over dose in the Maple Ridge prison. Oh yeah that was from drugs the government brought in. Go figure. Personally I don't like the idea of regular strip searches but there is no reason they can't use drug sniffing dogs. They should have drug sniffing dogs regularly at the border.