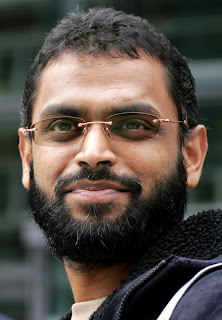 Guantanamo Bay detainee denied entry to Canada while George Bush who vetoed the bill to stop the CIA from torturing prisoners is welcomed in as well as Dick Cheney who's company Haliburton made a killing from the invasion of Iraq based on a lie. This is so wrong.

Since Stephen Harper fired and slandered the whistle blower for leaking out the fact that Canada was knowingly handing over prisoners in Afghanistan to be tortured, perhaps he just doesn't want Moazzam Begg to tell us about the torturing going on in Libya that Canadian tax dollars are supporting.