Another man gunned down in Edmonton 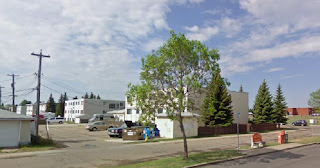 Edmonton Homicide investigators are probing yet another case after a man was gunned down outside a northside apartment building around midnight. The victim was shot outside the building near 132 Avenue and 67 Street. He was transported by ambulance to hospital but died of his injuries. 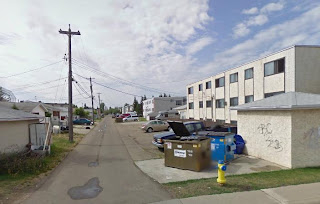 The case is being probed as the city's 43 homicide of 2011. Police tape still blocks access to the apartment building, which is directly across the street from Balwin Elementary School. As officers combed the scene Friday morning, children played in the school ground just yards away. The investigation is focused on the parking lot behind the Bayview Manor apartments.

Meanwhile the Edmonton Sun is reporting the names of the victims shot in the SUV at Rosehill Cemetery Tuesday are Trevor Greenway and Jason Trundle. Turns out our tip was right. The media asked me where I got the info from and I just said it was an anonymous tip but there was a facebook memorial page already set up. Looks like the media got the information from the family and friends not the police.

I'm not sure why the EPS would hold that information back. Surely they're not trying to hide the fact that some of their record breaking homicides has something to do with the drug trade. Why would they want to hide that? You'd think they'd want more resources to address the problem.

An autopsy has been scheduled for Monday afternoon. If the death is officially confirmed to be a homicide, it will be the 43rd in Edmonton this year. If it's confirmed to be a homicide? How can they say that with a straight face? Three fatalities in three days from shootings and they still have to determine if those suspicious death are actuality homicides. Give me a break.

Meanwhile Edmonton police charged two men in a shooting last Tuesday night at an apartment building in southwest Edmonton. The two men, aged 23 and 27, were arrested in Sherwood Park on Wednesday and charged with aggravated assault, robbery, wearing a disguise with intent, forcible confinement as well as various firearm charges. Yet their names have for some mysterious reason not been released. Sounds like a lot of strange things going on in Edmonton.