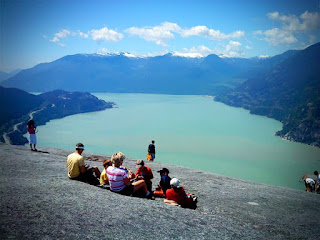 Sunday afternoon a group of hikers found a dead body near a hiking trail on the side of Mamquam Road in Squamish. "It appears the man was met with foul play," said spokeswoman Sgt. Jennifer Pound. "It does appear to be a homicide." Pound also refused to comment on media reports that the man's body was found beaten and duct-taped.

Kim Bolan has reported the identity of the body is that of William Woo from Surrey who was an associate of the East Vancouver hells angels but more recently went over to the other side. Now he's in a body bag. I wonder who the prime suspects are? If the East Vancouver chapter of the Hells angels contract a murder, that makes them a criminal organization guilty of murder. I don't know about the Duhre Daiquiris but Lotus, now there is some old school credibility right there. They are more than capable of professional payback.

Beaten and duck taped. Yeah that would imply foul play. It reminds me of two other cases in Squamish. One was a guy named Alex Larsen who was run over by a truck because he was lying in the middle of the road. It's so strange and tragic. Yes it's possible he got drunk or high and passed out. Yet we've never heard a word either way. We don't know if he was beaten and dumped there or if he was walking on the side of the road and a car hit him which was why he was lying in the middle of the road before the bus ran him over. The case comes to mind and I wish there was more pieces to that puzzle. They say he had made a decision to turn his life around. Just like Britney Irving. Tragic indeed.

Of course there's that other bizarre case in Squamish, the murder of Javan Luke Dowling. Three drug dealers were driving in a car in Vancouver. One of the drug dealers, shot one of the other drug dealers in the head and the third drug dealer watched the shooter cut off Dowling's head and dismembered his body. The two surviving drug dealers buried the body in two separate locations in Squamish. Mihaly Illes was alleged to be the shooter while Derrick Madinski helped him bury the body. Derrick Madinski went with Joe Brallic to LA where Joe was ripped off and murdered.

Meanwhile in that same original article about a new dead body being found in Squamish it later stated there was another shooting in Surrey near the corner of 111A Avenue and 146th Street at about 2: 40 a.m. on Sunday. It didn't even make it's own head line. Kinda sad. The point is violent crime is continuing and as the papers also report the court system is currently in crisis. That was before Harper's disproportionate crime bill sent the fragile system into chaos.