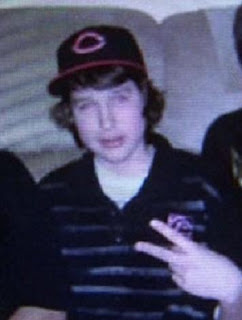 This is a local story that isn't gang related but it is a violent criminal act. Friday night, Jamie Kehoe, 18 was on a bus in Surrey and had his throat slashed in a senseless act of violence that ended his bright life before it got a chance to unfold. This is another disturbing case that ranks right up there with Jesse Cadman, Matthew Martins and Michael Levi.

There was a second well attended candlelight vigil for Jamie tonight. Jamie's father is making an appeal to the community to show up and support his son to support the arrest and conviction of his murderer. I am told friends of the family have a name and pictures of the accused and his girlfriend who started the fight. Personally I think those pictures should be plastered all over the neighbourhood so the murderer understands this community does not accept that kind of senseless violence.

So here's the deal. Two guys and a girl were on a bus. Another guy and girl come on the bus. The second girl gets vocal and starts to harass the other girl trying to pick a fight over and over. The other girl avoids the conflict and endures the harassment. When the loud mouth girl and her boyfriend get off the bus the girl finally tells the loud mouth to f off. The loud mouth freaks out, charges the girl and starts punching her. One of the guys gets up and tries to separate the girls from fighting. Jason is sitting there minding his own business and the loud mouth's boyfriend lunges at him and slits his throat with a knife killing him for no reason whatsoever.

If there isn't an arrest soon I think friends of the family should go public with the name and photo of the suspects. I'm told the suspects live in New West and have a brother that lives in the area. This kind of senseless violence isn't hard core, it's deranged. Killing someone for no reason is not human. It is a deranged individual who has no respect for human life.

Ah but yes, innocent until proven guilty. The Vancovuer Province is reporting that a man falsely acused of Jamie's murder has lost his job. Uttering threats on Facebook won't help anything. This guy admits he has a criminal record for asault and fraud. Race has nothing to do with it. He claims he doesn't even live in Surrey. No one said he did. Does he have a brother who not only lives in Surrey but lives on the bus route where the murder took place?

He worries how he’ll now support his wife, their four-year-old, and new baby on the way. If he is innocent and there has been a mistake then he should clearly get his job back. Even the paper implied his boss said it was temporary to give him a chance to sort out the allegations. The thing I want to know is that I heard there was a picture of him and a girl that witnesses ID'd. It's not just a matter of being on a witch hunt for some black guy. God know we have more than our share of white criminals in Surrey. He was seen in a picture with a girl that witnesses ID'd as the woman who started the fight on the bus. Threats will get us no where but these questions need to be addressed. Is he willing to voluntarily offer up a dNA sample to clear him once and for all?