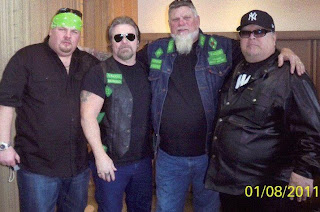 Hundreds of law enforcement officers swept across seven Southern California counties on Thursday targeting members and leaders of the Vagos motorcycle club, some of whom are accused of crimes including rape and solicitation of murder.

The early morning raids netted at least 12 arrests, drugs and more than 300 weapons, authorities said. Twenty-five others were already arrested, and more than 40 pounds of cocaine and eight pounds of methamphetamine (that would be crystal meth) were seized along with a rocket launcher.

Authorities said some members of the gang, which was founded in the 1960s and has about 500 members worldwide, were involved in a large-scale drug distribution ring. Members would threaten, intimidate or use violence to protect their interests, they said.

I have no problem with the weapons but why the drugs? 40 pounds of cocaine and eight pounds of methamphetamine? That's just more crack and more crystal meth fucking up our community.

Most recently, a Vagos member from Northern California was arrested in connection with the Sept. 23 slaying of Jeffrey “Jethro” Pettigrew, president of the San Jose chapter of the rival Hells Angels, during a shootout at a Nevada casino. Two Vagos members also were wounded in the melee, and a third was shot in the stomach the next morning by a gunman in a passing car.

OK we remember that one. The Hells angels objected to Vagos wearing colours because they think they rule the world and picked a fight. Then when they started losing the fight, homeboy pulls out a gun and starts shooting. Then they lose the gun fight and one of their boys ends up dead. Sounds like self defence to me. Yet banning gang colours is becoming necessary to preserve public safety. Reckless endangerment is not a charter right.

BTW that's Sean Brown on the top left sporting Vagos colours. He was the National President of the Rock Machine in Canada. Until they had a non confidence vote and kicked him out. Now they just trash talk their former brother. What ever happened to Forever RM RM Forever?

The group is from California but is now spreading to Australia and Canada. Vagos fight with the Hells Angels but in Australia they also fight with the Rock Machine. I'm not really sure who the Rock Machine gets along with in Australia. No doubt they'll be fighting Vagos as well as the Hells Angels in Canada now. Back in the day, people joined a gang for protection. Now wearing gang colours is just a target that says shoot me.

Ok so get this. The logo for Vagos is Loki, the Norse god of mischief. Vagos fight with the Hells Angels. Yet Sean Wolfe has the name Loki tattooed on his stomach. First I thought it was his stage name, Lola but someone pointed out to me it was in fact Loki, the god of mischief. So why on earth does a Hells Angel have the logo for the Hells angels enemy tattooed on his stomach? Oops. I guess he'll have to get that one covered up like he did his swallow tattoo. Unless of course they pull a Billy Moore or a Cedric Smith and kill one of their own for unknowingly sponsoring an informant. 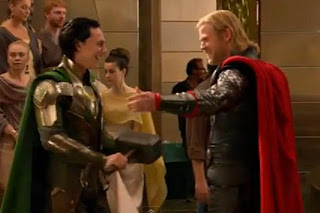 Looks like Vagos has made the big screen or at least their logo Loki. Loki is the younger brother of Thor and makes an appearance in the new movie. But get serious in "real" life Loki is supposed to be a liar and a con man. What's with those devil horns?

And they call Christians stupid. What's worse, worshipping an omniscient and omnipotent God with the power to create and to redeem or worshiping a satanic idol who is destined to lose and only has power to destroy and steal? I never understood why on earth anyone in ancient times would worship a golden calf. I mean like how stupid is that? That's something a caveman neanderthal would do who has no idea who he is or why he's here. We are DEVO. 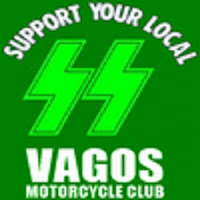 Posted by Dennis Watson at 2:21 PM