Tyrel Quesnelle and the Hells Angels 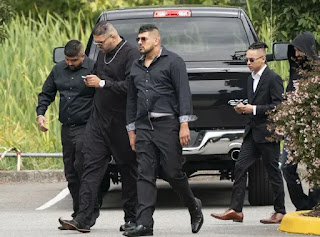 November of last year Tiffany Crawford did a spotlight on the Brothers Keepers and reported that "In December 2019, Keepers associate Tyrel Nguyen Quesnelle was charged with the October 2017 murder of Randy Kang, a former associate turned rival of the Keepers’ gang, and the November 2018 slaying of Jagvir Malhi." In this picture we see Harb Dhaliwal beside his brother Shrek and two steps behind them is Tyrel Quesnelle. They were attending Ali's funeral in Surrey.

Tyrel Quesnelle is a Brother's Keepers Associate. The Brother's Keepers work for the Edmonton Hells Angels. Tyrel was arrested in Edmonton. Shrek has always been a Hells Angels associate tied to Jamie Bacon. Now that Jamie Bacon is cooperating with the police, That puts Shrek and his brothers in a dangerous position. So here's the love triangle on paper.

Tiffany Crawford reported that "Postmedia News reporter Kim Bolan has reported extensively on the Brothers Keepers gang since its founder, Gavinder Grewal, was gunned down in his rented North Vancouver penthouse apartment on Dec. 22, 2017."

The Brothers Keepers have had quite a violent history of internal strife. After all, the founder was gunned down in North Vancouver and he wasn't gunned down by a rival. If the Hells Angels were to take over the Brother's Keepers, they had to get rid of it's founder first just like they did with the Death Riders in Laval. Tiffany Crawford is quite right. Kim Bolan has been right in there giving us a direct link to the CFSEU's spin on the Brother's Keepers from day one.

The UN did not kill Chad or Ali, the Hells Angels did. In fact almost all the Hells Angles ever killed in BC have been killed by the club. The Brother's Keepers had a huge respect for Ali. They would not kill him. That's why the Edmonton Hells Angels had to get someone from Edmonton to do it.

Tyrel was a rapper. I didn't report on the BK / BIBO beef because I didn't want to promote rappers shooting each other over petty sh*t. However, we need to be very clear what that beef was really about. Gary Kang did not kill Ali, the Edmonton Hells Angels did. Ali wanted the proceeds from the Brother's Keepers drug sales since he did all the work and the Edmonton chapter said no. That's was their money. So they killed him.

No doubt that created more internal strife within the Brother's Keepers tumultuous history. Ali was the one that held it all together. Killing him no doubt rekindled the previous conflict about servitude to the Hells Angels. Gary Kang was tied to Jamie Bacon and the Red Scorpions.

Gary Kang led a faction within the Red Scorpions that the Hells Angels felt threatened by. The Club embraced Jamie Bacon because he was an idiot who could never make it on his own without them. Gary Kang was a concern because he could make it on his own. He had his own supply contacts in Mexico and didn't need the Hells Angels so they killed him and everyone else that was a threat to Jamie Bacon's leadership in the Red Scorpions.

Then that little millennial b*tch had the audacity to claim the bikers stole from him. The bikers taxed him. Without the bikers, he would own nothing. So before Jamie Bacon started cooperating with the police, the Hells Angels were killing anyone they saw as a threat to his leadership in the Red Scorpions. After he started cooperating with the police, they started killing people who worked for him. You won't see that in the Fake News because IHIT and the CFSEU don't want to admit they are responsible for the spike in local gang violence. They'll just keep blaming those immigrants and refuse to charge the people that hired them. All roads lead to Rome. Or in this case, the Wolf Pack, who roll on the people they hire and the Edmonton Hells Angels.