Fatal shootings in Kamloops and Surrey 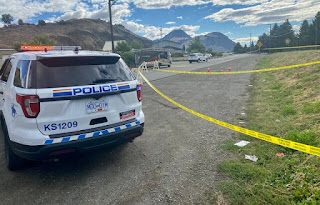 Castanet is reprting that "The Kamloops RCMP Serious Crime Unit said that a drive-by shooting that left one man dead and another injured on Friday night is believed to be a targeted incident and is considered a homicide. Police responded around 10:45 p.m. at Ord Road near Singh Street for a 911 call involving two men who had been shot while inside a red Toyota Matrix. Neighbourhood residents reported hearing multiple gunshots that night."

"RCMP said that the driver of the vehicle was pronounced dead shortly after, while the second victim was taken to the hospital in stable condition. Several hours later, around 2 a.m., police were called to a vehicle fire on Frontage Road in Rayleigh. Police are looking into whether the incidents are related, which is part of the ongoing investigation."

One man in hospital after shooting in Surrey Saturday night