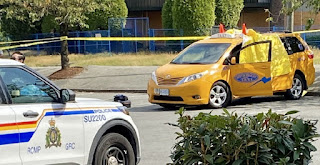 CTV is rpeoritng that "One person is dead and a second is in hospital after someone opened fire on a taxi Tuesday afternoon in Surrey, Mounties say. The shooting was reported in a parking lot on 108 Avenue shortly before 2:30 p.m. Police were called to a strip mall, and arrived to find both occupants of the taxi had been shot. A 30-year-old passenger, who has not been publicly identified, has died. The taxi driver was taken to hospital with injuries described as serious."

Update: CTV is reporitng that "The taxi passenger fatally shot in Surrey, B.C., earlier this week had recently been convicted of a drug offence, homicide investigators say. David Chavez-Jara, a resident of the city where he died, was killed Tuesday afternoon in a shooting in the Guildford area." He's had numerous drug convictions over the years.

Let's compare this shooting to that of Tequel Willis who was 14 years old when he was shot dead in Surrey after getting out of a cab. Police at the time said it was drug related. Naseem Ali Mohammed (Lil Man) did that hit. He was working for the Edmonton Hells Angels.

The Edmonton Hells Angels are the ones that now have jurisdiction over Surrey. Not the Hardside. That means they are the ones responsible for David Chavez-Jara's recent murder. The CFSEU know that but they don't care. They just want the business. The more business they have the more funding they get. We can't blame David's murder on Naseem. Naseem's gone. The common denominator here is the Edmonton Hells Angels. The CFSEU won't charge them just like they wouldn't charge Damion Ryan. The Manitoba RCMP had to. Hey Sfoo, God Damn You. 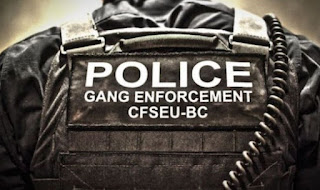 The Rat out your Rivals program is not about criminals snitching on other criminals. It's about high level drug dealers getting police protection to sell drugs in exchange for ratting out low level drug dealers like Blandon did and Michael Kramer did only Messa Mike was a murderer.