Massive Energy Hike in the UK

Families will face destitution this winter if action is not taken.

Join the campaign to save people in Wales £1,600 by cancelling the planned rise in energy bills this October 👇

Meanwhile, back on the ranch, Bloomberg is reporting that "The 150% Energy-Price Shock Waiting for the Next UK Leader. That’s the dramatic situation Boris Johnson’s successor, either Liz Truss or Rishi Sunak, will face as soon as they take over in September. Energy bills are set to soar weeks later when a price cap is raised by more than 60%, taking the increase this year to about 150%. For many, it will be too much to handle, leaving them unable to power, or heat, their homes. According to charity National Energy Action, one in three households — more than 8 million — are expected to be pushed into fuel poverty." This is a colossal fraud like Enron.

This is why Victoria's pledge to stop the construction of new homes powered by natural gas has absolutely nothing to do with saving the environment and everything to do with promoting the Great Reset turning consumers into slaves. If you increase demand on electricity, prices will rise.

Privatizing power is always a bad idea. Especially when you give them a monopoly on the market. That's Corporate Communism. A private company's quest is to make profit. More and more profit. In fact, there is no limit to their greed. That's why they have to be regulated. Hydroelectric dams are built with tax dollars. Privatizing their profits is a fraud.

"British Gas was privatised in 1986 under Margaret Thatcher's government, while the first parts of the electricity sector were privatised in late 1990, when the 12 regional electricity companies in England and Wales were sold." That is the problem. Just like how Gordon Campbell privatized the Independent Power Producers that sell power to the public company at above market rates. That colossal fraud is still a ticking time bomb of deferred debt. Terasen Gas doesn't have that problem. BC Hydro does. That's why they want to ban natural gas despite the fact that it's clean burning. It's also cheap. That's their concern. 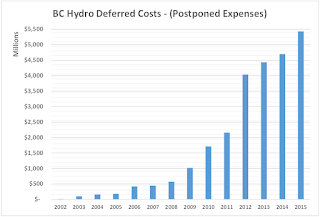