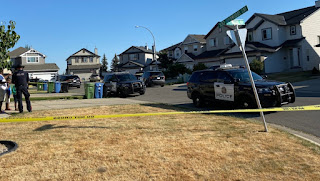 CTV is reporting that "Calgary police are investigating a shooting in the community of Evergreen on Thursday that left one person dead and another fighting for their life. Emergency crews were called to the 100 block of Everwoods Court S.W. around 8:20 a.m. Police say officers found a man and woman in a parked car, suffering from what appeared to be gunshot wounds. Police say the woman, identified as 31-year-old Nakita Baron, was declared dead at the scene. Paramedics transported the second victim, a man in his 30s, to hospital in critical, life-threatening condition.