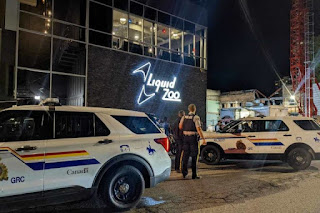 Update on the homicide outside the Liquid Zoo

Today in BC is reporting that "One man is dead following an incident at a downtown Kelowna nightclub. Kelowna RCMP was called to the 200-block of Lawrence Avenue around 11 p.m. on Aug. 12, to find a man laying on the ground while another man was seen running away. Emergency services transported the injured man to Kelowna General Hospital, where he was pronounced dead a short time later."

The Liquid Zoo? I can't believe that place still exists. I hear Dave is running for mayor. That is somewhat bizarre. As for the Zoo, there comes a time in a man's life when he's supposed to grow up. Peter Pan dancing around with the lost boys in never never land. Give it a rest. That ain't me.